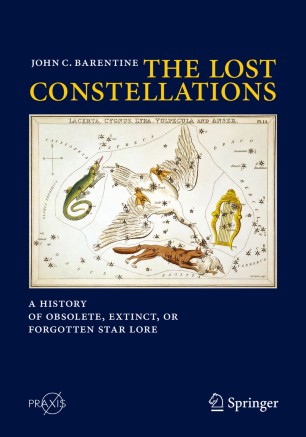 A History of Obsolete, Extinct, or Forgotten Star Lore

Casual stargazers are familiar with many classical figures and asterisms composed of bright stars (e.g., Orion and the Plough), but this book reveals not just the constellations of today but those of yesteryear. The history of the human identification of constellations among the stars is explored through the stories of some influential celestial cartographers whose works determined whether new inventions survived. The history of how the modern set of 88 constellations was defined by the professional astronomy community is recounted, explaining how the constellations described in the book became permanently “extinct.”  Dr. Barentine addresses why some figures were tried and discarded, and also directs observers to how those figures can still be picked out on a clear night if one knows where to look. These lost constellations are described in great detail using historical references, ennabling observers to rediscover them on their own surveys of the sky. Treatment of the obsolete constellations as extant features of the night sky adds a new dimension to stargazing that merges history with the accessibility and immediacy of the night sky.

John Barentine is a lifelong amateur astronomer, with formal education and experience in academic astronomy. He holds undergraduate and master’s degrees in physics and astronomy, and received his Ph.D. in astronomy from the University of Texas at Austin in 2013. His dissertation work followed the path of atomic and molecular gas from star formation through the evolution of galaxies. Most of his doctoral research was published in the Astrophysical Journal, and in previously published articles in other academic outlets such as the Astronomical Journal and Astronomical Society of the Pacific Conference Series volumes.

Previously, he was at Apache Point Observatory in New Mexico, where he was a staff scientist working on the Astrophysical Research Consortium 3.5-meter telescope and as an Observer for the Sloan Digital Sky Survey. For that work, John was honored in 2007 by the International Astronomical Union, which named the asteroid (14505) Barentine his honor. Now, he is the Program Manager for the International Dark-Sky Association. This work brings him into frequent contact with journalists and includes writing press releases. In 2006, he wrote a press release for an archaeoastronomy poster presented at a meeting of the AAS that went viral and resulted in worldwide media coverage as the “Barentine petroglyph”. In addition to John’s professional work, he writes an astronomy blog on Tumblr (strictlyastronomy.tumblr.com) and maintains an active presence on Twitter.