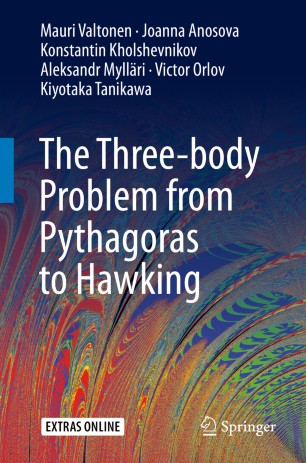 The Three-body Problem from Pythagoras to Hawking

The long history of the problem from Pythagoras to Hawking parallels the evolution of ideas about our physical universe, with a particular emphasis on understanding gravity and how it operates between astronomical bodies. The oldest astronomical three-body problem is the question how and when the moon and the sun line up with the earth to produce eclipses. Once the universal gravitation was discovered by Newton, it became immediately a problem to understand why these three-bodies form a stable system, in spite of the pull exerted from one to the other. In fact, it was a big question whether this system is stable at all in the long run.

Leading mathematicians attacked this problem over more than two centuries without arriving at a definite answer. The introduction of computers in the last half-a-century has revolutionized the study; now many answers have been found while new questions about the three-body problem have sprung up. One of the most recent developments has been in the treatment of the problem in Einstein’s General Relativity, the new theory of gravitation which is an improvement on Newton’s theory. Now it is possible to solve the problem for three black holes and to test one of the most fundamental theorems of black hole physics, the no-hair theorem, due to Hawking and his co-workers.

Kiyotaka Tanikawa has initiated the numerical symbolic dynamics of the collinear and planar three-body problem.  He graduated at the University of Tokyo in 1967 and has  worked in the International Latitude Observatory until 1988, and then in the National Astronomical Observatory of Japan.  He is retired Professor of the latter observatory and works there after retirement. Minor planet #10117 has been named after Tanikawa. He is also known as a historical astronomer using the ancient solar eclipses in order to determine the long-term variations of the Earth rotation.

Aleksandr Mylläri began the studies of the three-body problem in 1987 in Saint Petersburg State University. He has conducted joint research with all co-authors of the book. He is Associate Professor in St. George's University  in Grenada, West Indies, and Adjunct Professor in Åbo Akademi University in Finland.

Konstantin Kholshevnikov is a well known specialist in Celestial Mechanics. He has graduated in Saint Petersburg State University in 1962 and is currently the Head of Celestial Mechanics Chair of the same institute. His many awards include Leonhard Euler Medal of USSR Academy of Science, and the minor planet number 3504 is named after him.

Joanna Anosova is a pioneer in the study of the general three-body problem using computers. She is a graduate of Saint Petersburg State University, and has worked there for many decades. She is now retired Professor of University of Texas at Austin. The famous Agekian-Anosova map is named after her and her former teacher and colleague Tateos Agekian.

“The authors of the book under review are able to popularize an exquisitely (in principle) mathematical topic in a very fascinating way, which will be of interest for those with mathematical knowledge as well. … The pleasant reading of the book will gently introduce the general reader to the mysteries of the three-body problem and its solutions and, with the authors, he will discover that ‘besides the practical interest, there is beauty in the solutions’.” (Salvatore Esposito, Mathematical Reviews, March, 2017)

“Readers learn a vast amount about the history of astronomy while reading about the ubiquitous three-body problem; the presentation is done magnificently well–even without any mathematical equations! … Numerous diagrams clearly reveal important concepts, and the portrait photos and sketches connect readers to the involved historical figures. There is a great, complete index … . Summing Up: Recommended. Lower- and upper-division undergraduates; general readers.” (F. Potter, Choice, Vol. 54 (4), December, 2016)
Buy options