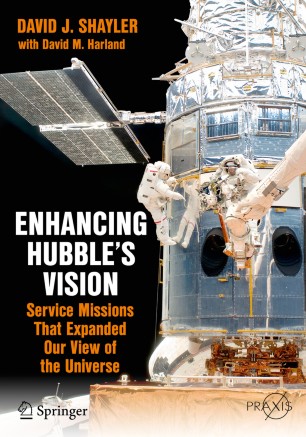 Service Missions That Expanded Our View of the Universe

After a 20-year struggle to place a large, sophisticated optical telescope in orbit the Hubble Space Telescope was finally launched in 1990, though its primary mirror was soon found to be flawed. A dramatic mission in 1993 installed corrective optics so that the intended science program could finally begin. Those events are related in a companion to this book, The Hubble Space Telescope: From Concept to Success.

Enhancing Hubble’s Vision: Service Missions That Expanded Our View of the Universe tells the story of the four missions between 1997 and 2009 that repaired, serviced and upgraded the instruments on the telescope to maintain its state-of-the-art capabilities. It draws on first hand interviews with those closely involved in the project. The spacewalking skills and experiences gained from maintaining and upgrading Hubble had direct application to the construction of the International Space Station and help with its maintenance. These skills can be applied to future human and robotic satellite servicing and maintenance activities as well, not only in Earth orbit but at locations deeper in space.

Originally intended to operate for fifteen years, Hubble has just passed its 25th anniversary, and there is every expectation that it will survive for thirty years. Despite its

early problems, the Hubble Space Telescope has become a lasting legacy of the Space Shuttle program, and indeed is a national treasure.