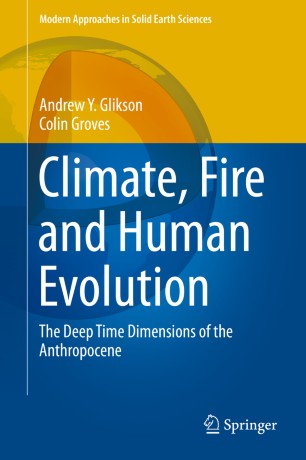 The Deep Time Dimensions of the Anthropocene

The book outlines principal milestones in the evolution of the atmosphere, oceans and biosphere during the last 4 million years in relation with the evolution from primates to the genus Homo – which uniquely mastered the ignition and transfer of fire. The advent of land plants since about 420 million years ago ensued in flammable carbon-rich biosphere interfaced with an oxygen-rich atmosphere. Born on a flammable Earth surface, under increasingly unstable climates descending from the warmer Pliocene into the deepest ice ages of the Pleistocene, human survival depended on both—biological adaptations and cultural evolution, mastering fire as a necessity. This allowed the genus to increase entropy in nature by orders of magnitude. Gathered around camp fires during long nights for hundreds of thousandth of years, captivated by the flickering life-like dance of the flames, humans developed imagination, insights, cravings, fears, premonitions of death and thereby aspiration for immortality, omniscience, omnipotence and the concept of god. Inherent in pantheism was the reverence of the Earth, its rocks and its living creatures, contrasted by the subsequent rise of monotheistic sky-god creeds which regard Earth as but a corridor to heaven. Once the climate stabilized in the early Holocene, since about ~7000 years-ago production of excess food by Neolithic civilization along the Great River Valleys has allowed human imagination and dreams to express themselves through the construction of monuments to immortality. Further to burning large part of the forests, the discovery of combustion and exhumation of carbon from the Earth’s hundreds of millions of years-old fossil biospheres set the stage for an anthropogenic oxidation event, affecting an abrupt shift in state of the atmosphere-ocean-cryosphere system. The consequent ongoing extinction equals the past five great mass extinctions of species—constituting a geological event horizon in the history of planet Earth.