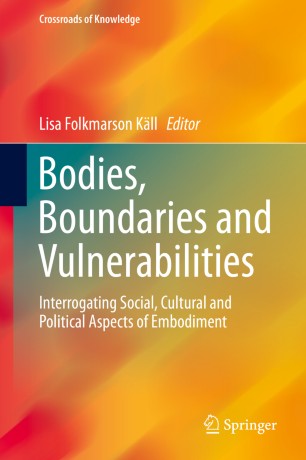 Part of the Crossroads of Knowledge book series (CROKNOW)

This volume explores the interrelations between bodily boundaries and vulnerabilities. It calls attention to the vulnerability of bodies as an essential aspect of having boundaries and being bound to other bodies. The volume advances an understanding of embodiment as the central aspect of subjectivity, its identity formation and its relations to others and the world. The essence of embodiment is what connects us with others and in equal measure what distinguishes us from others. The collection also addresses the centrality of the body to political and cultural activity, targeting the role and constitution of norms in the regulation of bodies, and the construction of spaces that bodies inhabit, in constructing national and cultural identities. It raises questions of how bodies and boundaries materialize in co-constitutive relation to one another; how bodies are situated and come to embody various bodies and intersections between different categories of identity and systems of value, meaning and knowledge; how the regulation and policing of bodies and the boundaries between them come to constitute bodies as being weak, strong, vulnerable or resilient and as having more or less fixed or fluid boundaries. The chapters in the volume all demonstrate how individual human bodies are formed in relation to each other as they are regulated and distinguished from one another by larger collective bodies of nature, culture, science, nation and state, as well as by other human or non-human animal bodies. ​