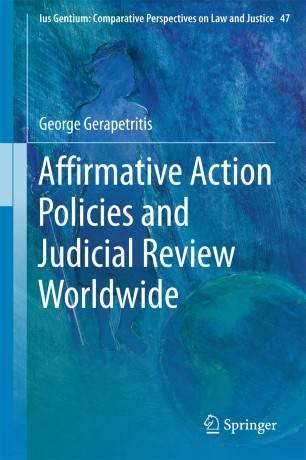 This book discusses affirmative action or positive discrimination, defined as measures awarding privileges to certain groups that have historically suffered discrimination or have been underrepresented in specific social sectors. The book’s underlying rationale is that one cannot place at the same starting point people who have been treated differently in the past because in this way one merely perpetuates a state of difference and, in turn, social gaps are exaggerated and social cohesion is endangered. Starting out with an introduction on the meaning and typology of affirmative action policies, the book goes on to emphasise the interaction of affirmative action with traditional values of liberal state, such as equality, meritocracy, democracy, justice, liberalism and socialism. It reveals the affirmative action goals from a legal and sociological point of view, examining the remedial, cultural, societal, pedagogical and economy purposes of such action. After applying an institutional narrative of the implementation of affirmative action worldwide, the book explains the jurisprudence on the issue through syntheses and antitheses of structural and material variables, such as the institutional recognition of the policies, the domains of their implementation and their beneficiaries. The book eventually makes an analytical impact assessment following the implementation of affirmative action plans and the judicial response, especially in relation to the conventional human rights doctrine, by establishing a liaison between affirmative action and social and group rights.. The book applies a multi-disciplinary and comparative methodology in order to assess the ethical standing of affirmative action policies, the public interests involved and their effectiveness towards actual equality. In the light of the above analysis, the monograph explains the arguments considering affirmative action as a theology for substantive equality and the arguments treating this policy as anathema for liberalism. A universal discussion currently at its peak.