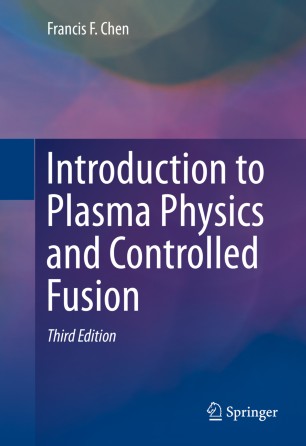 The third edition of this classic text presents a complete introduction to plasma physics and controlled fusion, written by one of the pioneering scientists in this expanding field.  It offers both a simple and intuitive discussion of the basic concepts of the subject matter and an insight into the challenging problems of current research. This outstanding text offers students a painless introduction to this important field; for teachers, a large collection of problems; and for researchers, a concise review of the fundamentals as well as original treatments of a number of topics never before explained so clearly.

This new revised edition remains an essential text for those new to the field and an invaluable reference source for established researchers.

Francis F. Chen, known as Frank in the physics community, got his B.A. from Harvard Observatory in 1950. His all-star oral committee consisted of famous astronomers Harlow Shapley, Bart J. Bok, Donald Menzel, and Earl Whipple. With pulsars and quasars still undiscovered, he switched to High Energy Physics, receiving his Ph.D. from Harvard in 1954. He had been sent by his adviser, Nobelist Norman Ramsey, to Brookhaven National Laboratory, where he worked on the Cosmotron and wrote the first experimental thesis for energies at or above 1 GeV. To avoid the Korean War draft, he then went to work for the astronomer Lyman Spitzer, Jr., who had just started the classified Project Matterhorn at Princeton University. This was one of four initial projects in the U.S. to tame the hydrogen bomb to make energy peacefully from the same reaction. In 1954, Chen was one of the first 15 employees at what is now the Princeton Plasma Physics Laboratory (PPPL). Project Matterhorn started in two old buildings, one formerly a rabbit hutch, and the other a horse operating room. Chen inherited the Model B1 Stellarator, built by James van Allen of the famous van Allen radiation belts around the earth. With the B1, Chen was the first to show that electrons could be trapped by a magnetic field for millions of traverses. By then, it was clear that fusion would require trapping a plasma, a hot, ionized gas of electrons and ions, and not just electrons. Subsequent Model B stellarators, however, failed to do this for longer than milliseconds. Realizing that stellarators were magnetic bottles that were curved and not straight, he convinced Spitzer to allow him to build straight machines to isolate the problem, even though these would have leaks at the ends. Chen then built the L-1 and L-2 machines with straight magnetic fields. Experiments on these showed that the plasma was lost by turbulence, and these random motions were aligned along the magnetic field, with wavelengths longer than any plasma waves known at that time. While on sabbatical in Paris, Chen figured out what these new waves were. They are now known as resistive drift waves and were discovered simultaneously in Russia by Sagdeev and Pogutse. In L-2, Chen and Mosher showed how this turbulence could be suppressed by magnetic fields that were not totally straight but had what is called shear. Modern magnetic bottles (called tokamaks), using advanced methods of stabilization, can hold a hot plasma for minutes. In 1969, Chen went from Princeton to UCLA in California, where he organized an academic program in plasma physics. He wrote the first undergraduate textbook in this field in 1973. Soon after, however, powerful lasers were invented, opening up a whole new field of research. Chen then left magnetic fusion to help start the field of laser fusion. He built the first laser at UCLA. In basic experiments, he and his students were among the first to study Brillouin and Raman scattering, two instabilities that cause problems even in laser-produced plasmas. This interesting field led to John Dawson’s discovery of plasma accelerators, which can shrink the size of machines for high-energy particle research by a factor of 1000! Chen recruited C. Joshi, whose experimental acumen has led his group to spectacular successes. Meanwhile, Chen left the effort to join yet another nascent field: low-temperature plasma physics. This involves partially ionized gases which include neutral atoms as well as ions and electrons. This complexity had led to its reputation as dirty science. By developing helicon plasma sources, which are magnetized, Chen showed that radiofrequency gas discharges contain very interesting physics which can be treated in a logical and interesting manner. Chen’s 57-year career in plasma physics can be divided into four approximately equal parts: magnetic fusion, laser fusion and laser accelerators, low-temperature plasma physics, and plasma diagnostics. In the last of these, Chen is an authority on the theory and use of Langmuir probes for local measurements of plasma density and electron temperature in different environments. He is the only physicist who has had significant publications in both theory and experiment in both the fields of magnetic and laser fusion. Outside of science, Chen enjoys the outdoors and is solicitous about the environment. He has been a pole-vaulter, soccer player and coach, backpacker, kayaker, and marathoner, and still plays tennis. He is a bird photographer, and he and his wife Ande have birded on all seven continents. She leads a bird and wildflower hike every weekend in the spring. They are concerned about the effect of climate change on wildlife species.