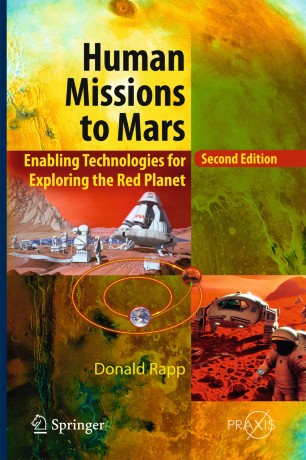 A mission to send humans to explore the surface of Mars has been theultimate goal of planetary exploration since the 1950s, when von Braun envisaged a flotilla of 10 interplanetary vessels carrying a crew of at least 70 humans. Since then, more than 1,000 studies have been carried out on human missions to Mars, but after 60 years of study, we remain in the early planning stages. The second edition of this book now includes an annotated history of Mars mission studies, with quantitative data wherever possible.

As in the first edition, Donald Rapp looks at human  missions  to  Mars from an engineering perspective. He divides each mission into a number of stages: Earth’s surface to low-Earth orbit (LEO); departing from LEO toward Mars; Mars orbit insertion and entry, descent and landing; ascent from Mars; trans-Earth injection from Mars orbit; and Earth return.  For each segment, he analyzes requirements for candidate technologies.  In this connection, he discusses  the  status  and  potential  of  a wide  range of elements critical to a human Mars mission, including life support consumables, radiation effects and shielding, microgravity effects, abort options and mission safety, possible habitats on the Martian surface and aero-assisted orbit entry descent and landing. For any human mission to the Red Planet the possible utilization of any resources indigenous to Mars would be of great value; such possibilities are discussed at length. He also discusses the relationship of lunar exploration to Mars exploration.

Detailed appendices describe the availability of solar energy on the Moon and Mars, and the potential for utilizing indigenous water on Mars.The second edition provides extensive updating and additions to the first edition, including many new figures and tables, and more than 70 new references, as of 2015.