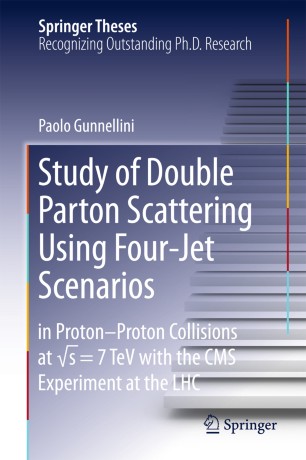 This thesis addresses, in a novel and elegant way, a combination of measurements that are used to extract so-called double parton scattering. The method is easy to apply and overcomes many of the technical difficulties of older methods. Many new phenomena in particle physics can be observed when particles are collided at the highest energies; one of the highlights in recent years was the discovery of the Higgs boson at the Large Hadron Collider at CERN. Understanding the production mechanism of the Higgs boson at the LHC requires detailed knowledge of the physics of proton-proton collisions. When the density of partons in the protons becomes large, there is a non-negligible probability that more than one parton participates in the interaction and the so-called double parton scattering becomes important. In some cases very particular final state signatures can be observed, which can be regarded as an indication of such double partonic scattering and where the different interactions can be separated. Such multiple partonic interactions play an important role when precise predictions from known processes are required.

A member of the CMS collaboration since 2012, Paolo Gunnellini received his PhD degree in 2014 with a joint project between the University of Hamburg and the University of Antwerpen. He mainly worked in Quantum Chromodynamics with a special focus on multiparton interactions in proton-proton collisions. Author of several phenomenological and experimental papers, he presented his results in various international conferences. Before his PhD, he worked also in the NA62 experiment at CERN in Geneva and he took part in two summer student programmes: in 2008 at CERN, Geneva and in 2011 at DESY, Hamburg. Currently, he works as a researcher at DESY, Hamburg within the CMS collaboration, and is looking forward to analysing the new upcoming data from the Large Hadron Collider.