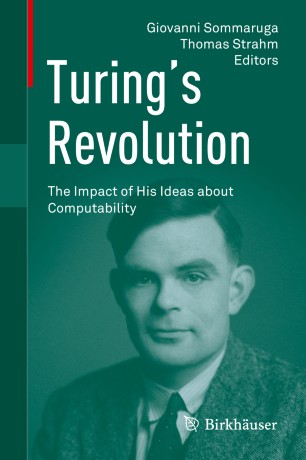 The Impact of His Ideas about Computability

This book provides an overview of the confluence of ideas in Turing’s era and work and examines the impact of his work on mathematical logic and theoretical computer science. It combines contributions by well-known scientists on the history and philosophy of computability theory as well as on generalised Turing computability. By looking at the roots and at the philosophical and technical influence of Turing’s work, it is possible to gather new perspectives and new research topics which might be considered as a continuation of Turing’s working ideas well into the 21st century.
The Stored-Program Universal Computer: Did Zuse Anticipate Turing and von Neumann?” is available open access under a Creative Commons Attribution 4.0 International License via link.springer.com

“There is a wide variety of content … in this collection about Turing’s ideas and what they meant for mathematics and computer science. … People of all mathematical and computer science backgrounds will find something of interest in this collection. Educators that would like to go deeper into the meaning of computability and algorithms can find material that will set the stage for discussions and research papers on the meaning and impact of the life and work of Alan Turing.” (Charles Ashbacher, MAA Reviews, maa.org, February, 2016)