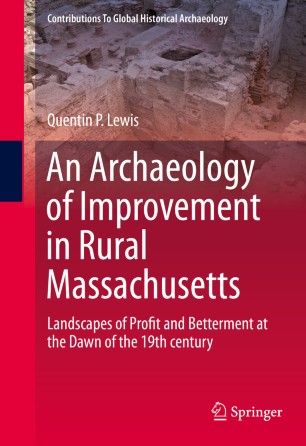 An Archaeology of Improvement in Rural Massachusetts

This book probes the materiality of Improvement in early 19th century rural Massachusetts. Improvement was a metaphor for human intervention in the dramatic changes taking place to the English speaking world in the 18th and 19th centuries as part of a transition to industrial capitalism.  The meaning of Improvement vacillated between ideas of economic profit and human betterment, but in practice, Improvement relied on a broad assemblage of material things and spaces for coherence and enaction.

Utilizing archaeological data from the home of a wealthy farmer in rural Western Massachusetts, as well as an analysis of early Republican agricultural publications, this book shows how Improvement’s twin meanings of profit and betterment unfolded unevenly across early 19th century New England. The Improvement movement in Massachusetts emerged at a time of great social instability, and served to ameliorate growing tensions between urban and rural socioeconomic life through a rationalization of space. Alongside this rationalization, Improvement also served to reshape rural landscapes in keeping with the social and economic processes of a modernizing global capitalism. But the contradictions inherent in such processes spurred and buttressed wealth inequality, ecological distress, and social dislocation.

Quentin Lewis received his BA in Archaeology from Boston University, and his MA and PhD from the University of Massachusetts. He has conducted archaeological work in the Midwestern and Northeastern United States, as well as in the North of England, where he is currently an Honorary Research Fellow in Archaeology at Durham University. He has continued his lifelong personal and scholarly fascination with New England with research on historical memory and the development of capitalism. His newest research project involves studying the impacts of the Great Depression on the landscapes of the Northeast of England.