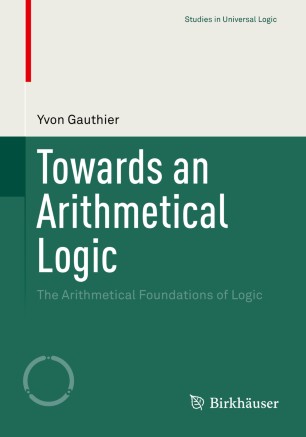 Towards an Arithmetical Logic

The Arithmetical Foundations of Logic

This book offers an original contribution to the foundations of logic and mathematics, and focuses on the internal logic of mathematical theories, from arithmetic or number theory to algebraic geometry. Arithmetical logic is the term used to refer to the internal logic of classical arithmetic, here called Fermat-Kronecker arithmetic, and combines Fermat’s method of infinite descent with Kronecker’s general arithmetic of homogeneous polynomials. The book also includes a treatment of theories in physics and mathematical physics to underscore the role of arithmetic from a constructivist viewpoint. The scope of the work intertwines historical, mathematical, logical and philosophical dimensions in a unified critical perspective; as such, it will appeal to a broad readership from mathematicians to logicians, to philosophers interested in foundational questions. Researchers and graduate students in the fields of philosophy and mathematics will benefit from the author’s critical approach to the foundations of logic and mathematics.

Yvon Gauthier has taught formal logic and philosophy of science at the Universities of Sudbury, Toronto and Montreal for fifty years. He has studied philosophy in Heidelberg and he has been a Research Fellow in mathematics in Berkeley and Leningrad (St-Petersburg). Author of fifteen books, he has published extensively in foundations of mathematics and foundations of physics in specialized journals. The present book aims at a synthesis of his recent work.

“The present book consists of eight chapters devoted to the internal logic of arithmetic … . Historical, mathematical, logical and philosophical aspects are considered and intertwined in the book. It can be interesting for logicians and mathematicians as well as for philosophers of mathematics.” (Roman Murawski, zbMATH 1339.03002, 2016)