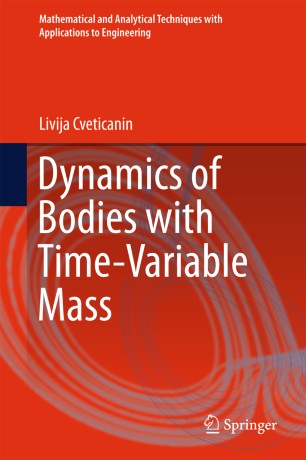 Dynamics of Bodies with Time-Variable Mass

This book deals with the problem of dynamics of bodies with time-variable mass and moment of inertia. Mass addition and mass separation from the body are treated. Both aspects of mass variation, continual and discontinual, are considered. Dynamic properties of the body are obtained applying principles of classical dynamics and also analytical mechanics. Advantages and disadvantages of both approaches are discussed. Dynamics of constant body is adopted, and the characteristics of the mass variation of the body is included. Special attention is given to the influence of the reactive force and the reactive torque. The vibration of the body with variable mass is presented. One and two degrees of freedom oscillators with variable mass are discussed. Rotors and the Van der Pol oscillator with variable mass are displayed. The chaotic motion of bodies with variable mass is discussed too. To support learning, some solved practical problems are included.

“This is a relatively brief reference book on the title subject. ‘Time-Variable Mass’ refers both to systems with abrupt mass changes and also to systems with uniform mass changes. … Several examples are included throughout the book. Both conservative and non-conservative systems are included, as well as nonlinear effects. Although the book appears to be directed toward theoreticians, it is likely to also be of interest and use to engineers and practitioners working with variable-mass systems.” (Ronald L. Huston, zbMATH 1344.70042, 2016)