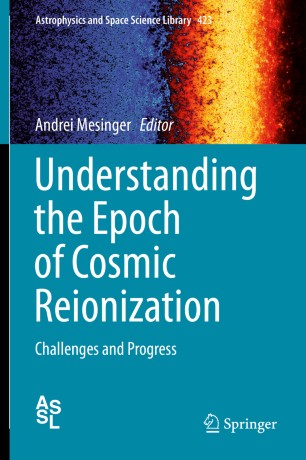 Understanding the Epoch of Cosmic Reionization

The aim of this volume is to summarize the current status and future outlook of the reionization field on both the theoretical and observational fronts. It brings together leading experts in many sub-disciplines, highlighting the measurements that are likely to drive the growing understanding of reionization and the cosmic dawn, and lays out a roadmap to interpreting the wealth of upcoming observations. The birth of the first stars and galaxies, and their impact on the diffuse matter perme­ating the early Universe, is one of the final frontiers in cosmology. Recently, measure­ments of the fluctuations in the cosmic microwave background (CMB), sourced only a few hundred thousand years after the Big Bang, provided robust insight into the overall physical content of our Universe. On the other end of the timeline, groundbreaking telescopes provide us a picture of the complexities of the galaxy-rich universe in which we now live. However, we know almost nothing about the astrophysics of the first billion years. During this relatively brief epoch, a tiny fraction of matter condensed inside the first galaxies, forming the first stars. This culminated in the final major phase change of our universe, cosmological reionization, which lifted the cosmic fog and allowed visible light to spread throughout space.
This mysterious ep­och of reionization corresponds to the transition between the relative simplicity of the early universe and the complexity of the
present-day one. It is fundamental in understanding cosmic origins, and its impact on structure formation resonates even to this day. Until recently, there was very little observational insight into the epoch of reionization. Subsequent observational and theoretical advancements have begun to paint a picture of a complicated, extended, inhomogeneous process. At its core, the process of cosmological reionization involves understanding how stars and clumps of gas impact each other and eventually the entire Universe. The challenges associated with such an enormous range of relevant scales, coupled with our relatively poor understanding of the dominant astrophysics, have thus far impeded efforts to form a solid theoretical framework. As such, the interpretation of the reionization data currently available remains controversial even as the wealth of data is increasing thanks to more sophisticated analytical and numerical approaches. Investigations have become subtler, discarding the “one size fits all” approach in favor of focused studies with specialized tools, placing astrophysics on the cusp of a dramatic increase in knowledge. What is the best use of limited observational resources? How to develop theoretical tools tailored for each observation? Ultimately, what will be learned about the epoch of reionization and the Universe’s galactic ancestors?

Andrei Mesinger is a Junior Professor at Scuola Normale Superiore of Pisa who received his PhD at Columbia. Dr. Mesinger was a Hubble Postdoctoral Fellow at the Princeton University Department of Astrophysical Sciences and a Postdoctoral Fellow at the Physics Departments of Yale University and UCLA. His research interests are first light, reionization, high-redshift sources, and modeling techniques.

“This is an excellent introduction to the ‘Epoch of Reionization’. … It is very timely, as it is a relatively new frontier in several senses … . this is an excellent collection of articles that give a balanced and comprehensive review of the state of the subject, and it is thoroughly recommended for students embarking on the topic, for the wider community of cosmologists, and for experts in the field, who will probably also learn something new as well.” (Alan Heavens, The Observatory, Vol. 137 (1256), February, 2017)
Buy options