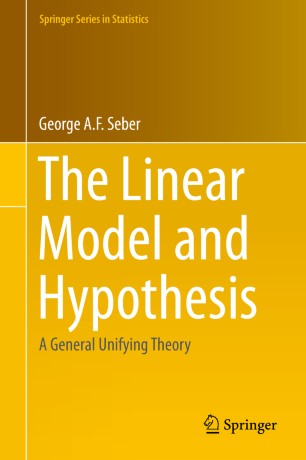 The Linear Model and Hypothesis

This book provides a concise and integrated overview of hypothesis testing in four important subject areas, namely linear and nonlinear models, multivariate analysis, and large sample theory. The approach used is a geometrical one based on the concept of projections and their associated idempotent matrices, thus largely avoiding the need to involve matrix ranks. It is shown that all the hypotheses encountered are either linear or asymptotically linear, and that all the underlying models used are either exactly or asymptotically linear normal models. This equivalence can be used, for example, to extend the concept of orthogonality in the analysis of variance to other models, and to show that the asymptotic equivalence of the likelihood ratio, Wald, and Score (Lagrange Multiplier) hypothesis tests generally applies.