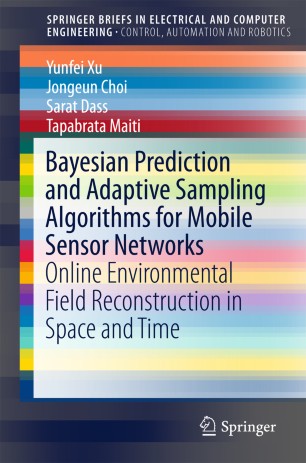 This brief introduces a class of problems and models for the prediction of the scalar field of interest from noisy observations collected by mobile sensor networks. It also introduces the problem of optimal coordination of robotic sensors to maximize the prediction quality subject to communication and mobility constraints either in a centralized or distributed manner. To solve such problems, fully Bayesian approaches are adopted, allowing various sources of uncertainties to be integrated into an inferential framework effectively capturing all aspects of variability involved. The fully Bayesian approach also allows the most appropriate values for additional model parameters to be selected automatically by data, and the optimal inference and prediction for the underlying scalar field to be achieved. In particular, spatio-temporal Gaussian process regression is formulated for robotic sensors to fuse multifactorial effects of observations, measurement noise, and prior distributions for obtaining the predictive distribution of a scalar environmental field of interest. New techniques are introduced to avoid computationally prohibitive Markov chain Monte Carlo methods for resource-constrained mobile sensors. Bayesian Prediction and Adaptive Sampling Algorithms for Mobile Sensor Networks starts with a simple spatio-temporal model and increases the level of model flexibility and uncertainty step by step, simultaneously solving increasingly complicated problems and coping with increasing complexity, until it ends with fully Bayesian approaches that take into account a broad spectrum of uncertainties in observations, model parameters, and constraints in mobile sensor networks. The book is timely, being very useful for many researchers in control, robotics, computer science and statistics trying to tackle a variety of tasks such as environmental monitoring and adaptive sampling, surveillance, exploration, and plume tracking which are of increasing currency. Problems are solved creatively by seamless combination of theories and concepts from Bayesian statistics, mobile sensor networks, optimal experiment design, and distributed computation.

Jongeun Choi is currently an Associate Professor with the Departments of Mechanical Engineering and Electrical and Computer Engineering at the Michigan State University. His current research interests include systems and control, system identification, and Bayesian methods, with applications to mobile robotic sensors, environmental adaptive sampling, engine control, neuromusculoskeletal systems, and biomedical problems. Funded by an NSF CAREER project, Dr. Choi and his coauthors at Michigan State University have  developed prediction and environmental adaptive sampling algorithms for mobile sensor networks. From this project, Dr. Choi's group published 13 journal papers and 18 conference proceeding papers including two papers that were selected as finalists for the Best Student Paper Award at the Dynamic System and Control Conference (DSCC) 2011 and 2012.
Sarat C. Dass received his Ph.D. and M.S. degrees in Statistics from Purdue University at West Lafayette, Indiana, US, in 1995 and 1998, respectively. He is currently Associate Professor at Universiti Teknologi Petronas in Malaysia. He received the B.Stat. (Hons) degree in Statistics from the Indian Statistical Institute in 1993. His current research interests include statistical inference for dynamical systems, statistical pattern recognition and image processing, and Bayesian methods with applications to various fields of engineering and technology. He is an Associate Editor for Sankhya B, Journal of the Indian Statistical Institute. He has received several awards for his interdisciplinary work including the Outstanding Statistical Application award from the American Statistical Association (ASA) and the Frank Wilcoxon award from Technometrics. Dr. Dass is a member of ASA and ISBA.
Tapabrata Maiti is a world class statistician, a fellow of the American Statistical Association and the Institute of Mathematical Statistics. He has published research articles in top tier statistics journals such as Journal of the American Statistical Association, Annals of Statistics, Journal of the Royal Statistical Society, Series B, Biometrika, Biometrics etc. He has also published research articles in engineering, economics, genetics, medicine and social sciences. His research has been supported by the National Science Foundation and National Institutes of Health. He presented his work in numerous national and international meetings and in academic departments. Prof. Maiti served in editorial board of several statistics journals including journal of the American Statistical Association and journal of Agricultural, Environmental and Biological Statistics.  He also served in several professional committees. Currently, he is a professor and the graduate director in the department of statistics and probability, Michigan State University. Prior to MSU, he was a tenured faculty member in the department of statistics, Iowa State University. Professor Maiti supervised several Ph.D. students and regularly teaches statistics and non-stat major graduate students.