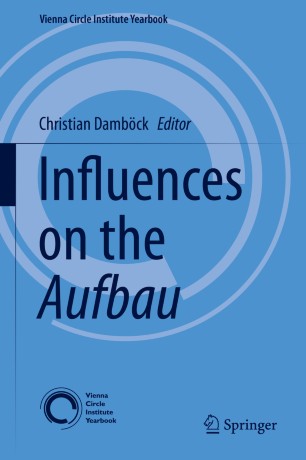 Influences on the Aufbau

​This volume offers 11 papers that cover the wide spectrum of influences on Rudolf Carnap’s seminal work, Der Logische Aufbau der Welt (The Logical Structure of the World). Along the way, it covers a host of topics related to this important philosophical work, including logic, theories of order, science, hermeneutics, and mathematics in the Aufbau, as the work is commonly termed. The book uncovers the influences of such neglected figures as Gerhards, Driesch, Ziehen, and Ostwald. It also presents new evidence on influences of well-known figures in philosophy, including Husserl, Rickert, Schlick, and Neurath. In addition, the book offers comparisons of the Aufbau with the work of contemporary scientists such as Weyl and Wiener as well as features new archival findings on the early Carnap.This book will appeal to researchers and students with an interest in the history and philosophy of science, history of analytic philosophy, the philosophy of the Vienna Circle, and the philosophy in interwar Germany and Austria.

Christian Damböck studied philosophy in Vienna with added focuses on mathematics and history. He received his PhD at the University of Vienna in 2005 with a dissertation on philosophical logic. From 2002 to 2011 he worked at the Institute Vienna Circle (University of Vienna) in several research projects, all funded by the Austrian Science Fund (FWF), and directed by Friedrich Stadler. Recently he started working as an FWF researcher in the research project “Wilhelm Dilthey and Rudolf Carnap” (FWF research grant P24615) which is also located at the Institute Vienna Circle. In Spring term 2015 he will be Visiting Fellow at the Center for Philosophy of Science, University of Pittsburgh. Christian’s main areas of research are history of philosophy and philosophy of science in the 19th and 20th century in central Europe; methodological questions in philosophy and philosophy of science; history and philosophy of logic; philosophy of the humanities; the philosophies of Wilhelm Dilthey, Hermann Cohen, Rudolf Carnap, Thomas Kuhn and Wolfgang Stegmüller.