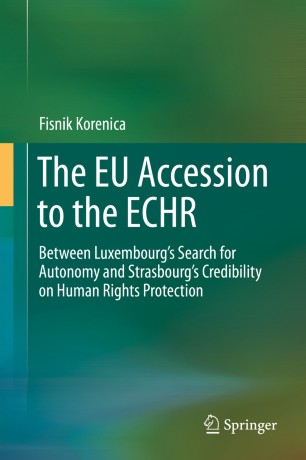 The EU Accession to the ECHR

This book examines the EU accession to the ECHR from a systemic perspective as well as from the specific perspective of the 2013 draft accession agreement negotiated between the relevant body of the Council of Europe and the EU Commission. It mainly follows a legal positivist approach to examining the nature and scope of obligations that will regulate the new relationship between EU law and European Convention on Human Rights law, concentrating specifically on the issue of jurisdictional interface between the Strasbourg and Luxembourg courts. The book offers an in-depth examination of the core mechanisms of the draft accession agreement, taking into account the remarks in Luxembourg's Opinion 2/13, focusing especially on the issue of attribution of responsibility when a violation of ECHR has been jointly committed by the EU and its Member States, the inter-party procedure and the prior involvement mechanism. The work basically argues that EU accession to the ECHR will have a constitutional impact on the EU legal order, and may also have certain implications for the jurisdictional interface between the Strasbourg and Luxembourg courts. It also questions the mode of interaction between some normative aspects of ECHR law and EU law, offering certain arguments as to the interaction between the Charter of Fundamental Rights and ECHR from overlapping and accommodative perspectives post-accession. The book concludes that with the EU accession to the ECHR – as it stands right now with the draft accession agreement – the macro relationship between the Strasbourg and Luxembourg courts will change significantly, while their constitutional roles will become vertically accommodated and better specialized.