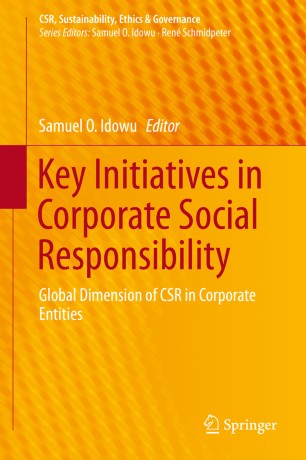 This book presents initiatives that were launched or are currently being pursued in the name of CSR, and showcases how different dimensions of CSR, sustainability, ethics and governance can help to solve global challenges.

Contributions by international experts from Australia to Bangladesh and from Nigeria to Spain address current issues in their respective country, such as challenges faced by nations, initiatives launched in the name of CSR, and attempts on the part of small and medium sized enterprises to promote CSR initiatives.

This volume provides readers with in-depth insights into CSR and important initiatives around the globe intended to encourage more responsible behavior.

Samuel O Idowu is a senior lecturer in Accounting and Corporate Social Responsibility at the London Guildhall Schools of Business and Law, London Metropolitan University where he was course organizer for Accounting Joint degrees, Course Leader/Personal Academic Adviser (PAA) for students taking Accounting Major/Minor and Accounting Joint degrees and currently Course Leader for Accounting and Banking degree. Samuel is a Professor of CSR and Sustainability at Nanjing University of Finance & Economics, China. He is a fellow member of the Institute of Chartered Secretaries and Administrators, a fellow of the Royal Society of Arts, a Liveryman of the Worshipful Company of Chartered Secretaries & Administrators and a named freeman of the City of London.

Samuel has published about fifty or articles in both professional and academic journals and contributed chapters in edited books and is the Editor-in-Chief of two major global reference books by Springer – the Encyclopedia of Corporate Social Responsibility (ECSR) and the Dictionary of Corporate Social Responsibility (DCSR) and he is a Series Editor for Springer’s books on CSR, Sustainability, Ethics and Governance. Samuel has been in academia for 27 years winning one of the Highly Commended Awards of Emerald Literati Network Awards for Excellence both in 2008 and 2014. In 2010, one of his edited books was placed in 18th position out of forty top Sustainability books by Cambridge University Programme for Sustainability Leadership. He has examined for the following professional bodies: the Chartered Institute of Bankers (CIB) and the Chartered Institute of Marketing (CIM) and has marked examination papers for the Association of Chartered Certified Accountants (ACCA). His teaching career started in November 1987 at Merton College, Morden, Surrey; he was a Lecturer/Senior Lecturer at North East Surrey College of Technology (Nescot) for thirteen years where he was the Course Leader for BA (Hons) Business Studies, ACCA and CIMA courses. He has also held visiting lectureship posts at Croydon College and Kingston University both in the county of Surrey, England. He was a senior lecturer at London Guildhall University prior to its merger with the University of North London; when London Metropolitan University was created in August 2002.

Samuel has served as an external examiner to a number of UK Universities including the University of Sunderland, the University of Ulster, Belfast and Coleraine, Northern Ireland and Anglia Ruskin University, Chelmsford. He is currently an External Examiner at the University of Plymouth, The Robert Gordon University, Aberdeen, Scotland and Teesside University, Middlesbrough, UK. He was also the Treasurer and a Trustee of Age Concern, Hackney, East London from January 2008 to September 2011. He is a member of the Committee of the Corporate Governance Special Interest Group, of the British Academy of Management (BAM). Samuel is on the Editorial Advisory Board of the Management of Environmental Quality Journal, International Journal of Business Administration and Amfiteatru Economic Journal. He has been researching in the field of CSR since 1983 and has attended and presented papers at several national and international conferences and workshops on CSR and has made a number of keynote speeches at international conferences.