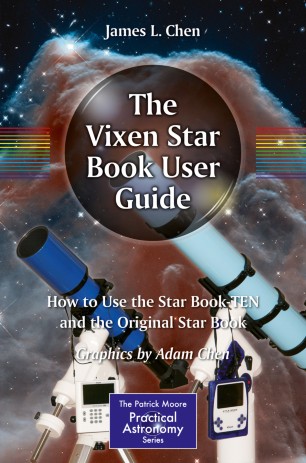 This book is for anyone who owns, or is thinking of owning, a Vixen Star Book Ten telescope mount or its predecessor. A revolution in amateur astronomy has occurred in the past decade with the wide availability of high tech, computer-driven, Go-To telescopes. Vixen Optics is leading the way by offering the Star Book Ten system, with its unique star map graphics software.

The Star Book Ten is the latest version of computer telescope control using star map graphics as a user interface, first introduced in the original Star Book first offered in 2003. The increasingly complicated nature of this software means that learning to optimize this program is not straightforward, and yet the resulting views when all features are correctly deployed can be phenomenal.

After a short history of computerized Go-To telescopes for the consumer amateur astronomer market, Chen offers a treasury of technical information. His advice, tips, and solutions aid the user in getting the most out of the Star Book Ten system in observing sessions.

James Chen is retired from the Department of the Navy and Federal Aviation Administration where he worked as a Radar and Surveillance Systems Engineer. A guest lecturer at local Washington DC/Northern Virginia/Maryland astronomy clubs on amateur astronomy topics of eyepiece design and optical filters, he wrote a short Astronomy Magazine article on Dobsonian telescope design November 1989 and served as a sales consultant to two Washington DC area telescope stores for over 30 years. He is the author of "How to Find the Apollo Landing Sites" and "A Guide to the Hubble Space Telescope Objects".