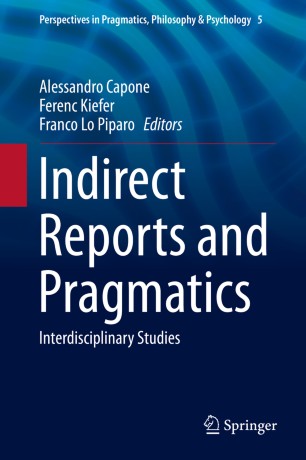 This volume offers the reader a singular overview of current thinking on indirect reports. The contributors are eminent researchers from the fields of philosophy of language, theoretical linguistics, and communication theory, who answer questions on this important issue. This exciting area of controversy has until now mostly been treated from the viewpoint of philosophy. This volume adds the views from semantics, conversation analysis and sociolinguistics.

Authors address matters such as the issue of semantic minimalism vs. radical contextualism, the attribution of responsibility for the modes of presentation associated with Noun Phrases, and how to distinguish the indirect reporter’s responsibility from the original speaker’s responsibility. They also explore the connection between indirect reporting and direct quoting. Clearly indirect reporting has some bearing on the semantics/pragmatics debate, however, there is much controversy on “what is said”, whether this is a minimal semantic logical form (enriched by saturating pronominals) or a much richer and fully contextualized logical form. This issue will be discussed from several angles. Many of the authors are contextualists and the discussion brings out the need to take context into account when one deals with indirect reports, both the context of the original utterance and the context of the report. It is interesting to see how rich cues and clues can radically transform the reported message, assigning illocutionary force, and how they can be mobilized to distinguish several voices in the utterance. Decoupling the voice of the reporting speaker from that of the reported speaker on the basis of rich contextual clues is an important issue that pragmatic theory has to tackle. Articles on the issue of slurs will bring new light to the issue of decoupling responsibility in indirect reporting, while others are theoretically oriented and deal with deep problems in philosophy and epistemology.