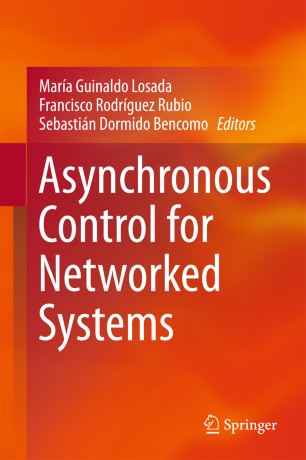 This book sheds light on networked control systems; it describes different techniques for asynchronous control, moving away from the periodic actions of classical control, replacing them with state-based decisions and reducing the frequency with which communication between subsystems is required. The text focuses specially on event-based control.

Split into two parts, Asynchronous Control for Networked Systems begins by addressing the problems of single-loop networked control systems, laying out various solutions which include two alternative model-based control schemes (anticipatory and predictive) and the use of H2/H∞ robust control to deal with network delays and packet losses. Results on self-triggering and send-on-delta sampling are presented to reduce the need for feedback in the loop. In Part II, the authors present solutions for distributed estimation and control. They deal first with reliable networks and then extend their results to scenarios in which delays and packet losses may occur.

The novel results presented in Asynchronous Control for Networked Systems are transmitted in a concise and clear style supported by simulation and experimental examples. Some applications are also provided.

Academic researchers and graduate students investigating control theory, control engineering and computer communications systems can use this monograph to learn how asynchronous control helps tackle the problems of networked systems in centralized and distributed schemes. Control practitioners at work in power systems, vehicle coordination and traffic networks will also find this book helpful in

improving the performance of their systems.