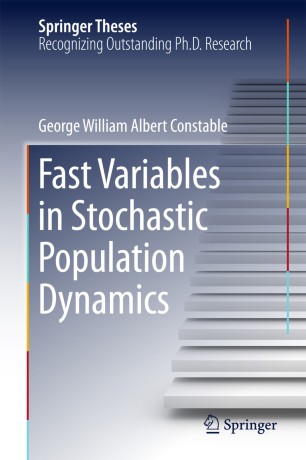 In this thesis two variants of the fast variable elimination method are developed. They are intuitive, simple to implement and give results which are in very good agreement with those found from numerical simulations. The relative simplicity of the techniques makes them ideal for applying to problems featuring demographic stochasticity, for experts and non-experts alike.

Within the context of mathematical modelling, fast variable elimination is one of the central tools with which one can simplify a multivariate problem.  When used in the context of of deterministic systems, the theory is quite standard, but when stochastic effects are present, it becomes less straightforward to apply.

While the introductory and background chapters form an excellent primer to the theory of stochastic population dynamics, the techniques developed can be applied to systems exhibiting a separation of timescales in a variety of fields including population genetics, ecology and epidemiology.

George Constable has a background in non-equilibrium statistical physics, and is especially interested in applying the ideas and techniques of stochastic theory to ecological and biological systems. His first degree was from the University of Glasgow and his Ph.D was obtained from the University of Manchester. While there, his work was primarily concerned with the derivation of effective theories for microscopically defined individual based models. Currently, he is a postdoctoral researcher looking at the effects of spatial structure on population level dynamics in the Ecology and Evolutionary Biology Department at Princeton University.