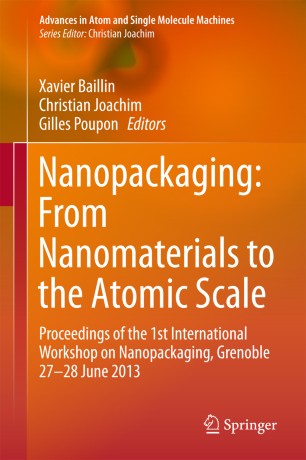 Nanopackaging: From Nanomaterials to the Atomic Scale

Proceedings of the 1st International Workshop on Nanopackaging, Grenoble 27-28 June 2013

This book is a first attempt to merge two different communities: scientists and technologists. Therefore, it is not a general overview covering all the fields of nanopackaging, but is mainly focused on two topics. The first topic deals with atomic scale devices or circuit requirements, as well as related recent technological developments; for example, surface science engineering and atomic scale interconnects studies. The second main part of the book brings CNT nano-materials solutions for resolving interconnect or thermal management problems in microelectronics device packaging. This book is not just useful for those who attended the International Workshop on Nanopackaging in Grenoble, but can provide valuable information to scientists and technologists in the nanopackaging community.

Xavier BAILLIN is CEA senior expert in the field of micro devices packaging. After twenty years dedicated to address basic research focused on the relationship between microstructure and mechanical behavior of different industrial alloys, he joined Léti in 2003 where he has been in charge of wafer level packaging activity. He has specially contributed to the development of technologies dedicated to atmosphere controlled packaging for MEMS and also in 3D integration technologies. Xavier is the co-author of about 40 publications and 20 patents. He is currently involved in a flagship project launched by CEA in 2013 and focused on bio-inspired solutions development for 3D construction at the nanometric scale.

Gilles Poupon (IEEE M’05, SM’10) received his M.S. in Electrochemistry in 1985. He joined CEA-LETI, Grenoble, France, in 1987 where he has been Director of Strategic Programs on Advanced Packaging for 10 years and is now Scientific Advisor. Gilles Poupon is a member of the Board of Governors of the IEEE Components Packaging and Manufacturing Technology Society (CPMT) and Technical Director of the International Microelectronics and Packaging Society France (IMAPS). Additionally, Gilles is Scientific Advisor of EURIPIDES (European cluster on packaging) and member of ITRS Assembly & Packaging Technical Working Group and European Branch of JISSO working group. Gilles Poupon has published two books and he has authored 3 chapters of books and co-authored and authored over 50 proceedings papers and journal papers. He has more than 10 patents in the field of advanced packaging, micro systems technologies and 3D integration.

Christian JOACHIM is CNRS Director of Research, Nanosciences group at CEMES/CNRS and adjunct Professor of Quantum Physics at Sup’Aero (ISAE) Toulouse. In Singapore, he is A*STAR VIP at IMRE on atom technology and head of the WPI MANA-NIMS satellite in Toulouse. He coordinated European projects like "Bottom-up Nanomachines" and “Pico-Inside”. He is currently coordinating the large European integrated project AtMol (2011-2014) to build the first ever molecular chip. He is the author of more than 230 scientific publications (h=51) and has presented over 310 invited talks on electron transfer through a molecule, STM and Atomic Force Microscopy (AFM) image calculations, tunnel transport through a molecule, molecular devices, nanolithography and single molecule machines. His book: “Nanosciences, the invisible revolution” (World Scientific, 2009) is presenting the history of Nanosciences and its political drawbacks to a general public.