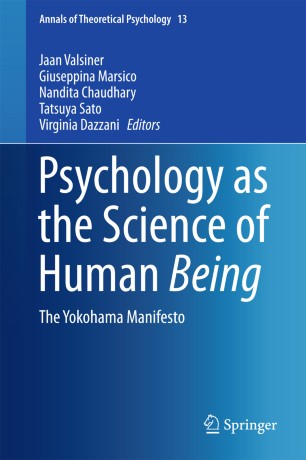 Psychology as the Science of Human Being

This book brings together a group of scholars from around the world who view psychology as the science of human ways of being. Being refers to the process of existing - through construction of the human world – here, rather than to an ontological state. This collection includes work that has the goal to establish the newly developed area of cultural psychology as the science of specifically human ways of existence. It comes as a next step after the “behaviorist turn” that has dominated psychology over most of the 20th century, and like its successor in the form of “cognitivism”, kept psychology away from addressing issues of specifically human ways of relating with their worlds. Such linking takes place through intentional human actions: through the creation of complex tools for living, entertainment, and work. Human beings construct tools to make other tools. Human beings invent religious systems, notions of economic rationality and legal systems; they enter into aesthetic enjoyment of various aspects of life in art, music, and literature; they have the capability of inventing national identities that can be summoned to legitimate one’s killing of one’s neighbors, or being killed oneself.

The contributions to this volume focus on the central goal of demonstrating that psychology as a science needs to start from the phenomena of higher psychological functions, and then look at how their lower counterparts are re-organized from above. That kind of investigation is inevitably interdisciplinary - it links psychology with anthropology, philosophy, sociology, history, and developmental biology. Various contributions to this volume are based on the work of Lev Vygotsky, George Herbert Mead, Henri Bergson, and on traditions of Ganzheitspsychologie and Gestalt psychology.

Psychology as the Science of Human Being is a valuable resource to psychologists, sociologists, philosophers, biologists, and anthropologists alike.​

Jaan Valsiner is the Niels Bohr Professor of Cultural Psychology at Aalborg University, Denmark.  He is the founding editor of Culture & Psychology (Sage) and the Editor-in-Chief of Integrative Psychological and Behavioral Sciences (Springer, from 2007). In 1995 he was awarded the Alexander von Humboldt Prize in Germany for his interdisciplinary work on human development, and Senior Fulbright Lecturing Award in Brazil 1995-1997.

Nandita Chaudhary is Professor of Psychology at Lady Irwin College, University of Delhi, India. She is best known for her cultural psychological studies of child development in social contexts of high complexity—where child-related issues are coordinated by coalition formation of all child-related actors. She links developmental psychology with cultural psychology through an advanced focus on phenomena of human everyday life.

Virginia Dazzani is Professor of Graduate Programmes in Psychology and in Education at the Federal University of Bahia, Salvador, Brazil. She has extensive experience in the educational psychology field. Her research track includes studies on knowledge and learning, family-school-community relationship/communication, semiotic processes. Her research expertise lies in the interface between psychology, cultural development and education.

Giuseppina Marsico is a professor and researcher at the Development and Educational Psychology at the Department of Human, Philosophic and Education Sciences (DISUFF), at the University of Salerno (Italy) and Adjunct Professor at Ph.D Programme in Psychology, Federal University of Bahia, Salvador, Brazil. She is a 15 years experienced researcher, with a proven international research network. Her research track includes studies on developmental risk at school, youth deviance, school-family communication, boundaries and contexts. She is Editor of the book series, Cultural Psychology of Education (Springer); Associate Editor of Cultural & Psychology Journal (Sage); and member of the editorial board of Integrative Psychological & Behavioral Science (Springer). She also edited the book Crossing Boundaries: Intercontextual Dynamics Between Family and School (Information Age Publishing).

Tatsuya Sato is Professor of Social Psychology and Dean of Research at Ritsumeikan University in Kyoto, Japan.  He is a co-founder of the Trajectory Equifinality Approach in the study of human development, and the leading specialist in Japan on history of psychology and qualitative methodologies.