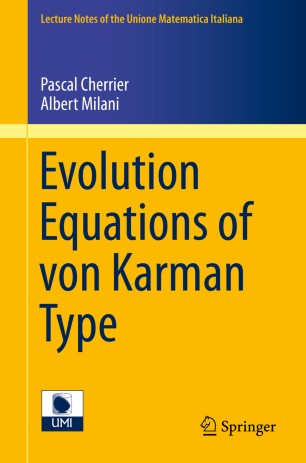 In these notes we consider two kinds of nonlinear evolution problems of von Karman type on Euclidean spaces of arbitrary even dimension. Each of these problems consists of a system that results from the coupling of two highly nonlinear partial differential equations, one hyperbolic or parabolic and the other elliptic. These systems take their name from a formal analogy with the von Karman equations in the theory of elasticity in two dimensional space. We establish local (respectively global) results for strong (resp., weak) solutions of these problems and corresponding well-posedness results in the Hadamard sense. Results are found by obtaining regularity estimates on solutions which are limits of a suitable Galerkin approximation scheme. The book is intended as a pedagogical introduction to a number of meaningful application of classical methods in nonlinear Partial Differential Equations of Evolution. The material is self-contained and most proofs are given in full detail.

The interested reader will gain a deeper insight into the power of nontrivial a priori estimate methods in the qualitative study of nonlinear differential equations.