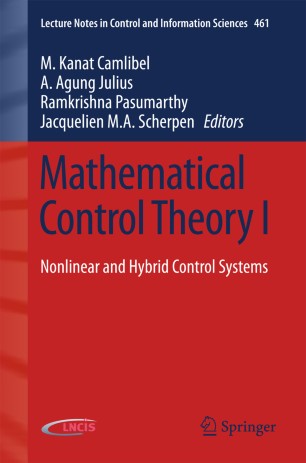 This treatment of modern topics related to mathematical systems theory forms the proceedings of a workshop, Mathematical Systems Theory: From Behaviors to Nonlinear Control, held at the University of Groningen in July 2015. The workshop celebrated the work of Professors Arjan van der Schaft and Harry Trentelman, honouring their 60th Birthdays.

The first volume of this two-volume work covers a variety of topics related to nonlinear and hybrid control systems. After giving a detailed account of the state of the art in the related topic, each chapter presents new results and discusses new directions. As such, this volume provides a broad picture of the theory of nonlinear and hybrid control systems for scientists and engineers with an interest in the interdisciplinary field of systems and control theory. The reader will benefit from the expert participants’ ideas on exciting new approaches to control and system theory and their predictions of future directions for the subject that were discussed at the workshop.

Kanat Camlibel received the Ph.D. degree in mathematical theory of systems and control from Tilburg University, Tilburg, The Netherlands, in 2001. Currently, he is affiliated with Johann Bernoulli Institute for Mathematics and Computer Science, University of Groningen, Groningen, The Netherlands, where he served as an Assistant Professor between 2007 and 2013. From 2001 to 2007, he held Post-Doctoral/Assistant Professor positions with the University of Groningen, Tilburg University, and Eindhoven Technical University, Eindhoven, The Netherlands. His research interests include differential variational inequalities, complementarity problems, optimization, piecewise affine dynamical systems, switched linear systems, constrained linear systems, multi-agent systems, model reduction, and geometric theory of linear systems. Dr. Camlibel has published 40 journal articles and 60 conference articles. He has served as an Associate Editor for International Journal of Robust and Nonlinear Control for several years and currently is an Associate Editor for SIAM Journal on Control and Optimization and Systems & Control Letters. Dr. Camlibel serves as an Associate Editor also for a number of conferences including IEEE Control and Decision Conference, American Control Conference, European Control Conference as well as IFACWorld Congress on Automatic Control. In addition, he served as International Program Committee member for various conferences including the 3rd IFAC Conference on Analysis and Design of Hybrid Systems, 12th European Control Conference, and 21st International Symposium on Mathematical Theory of Networks and Systems.
A. Agung Julius joined the Department of Electrical, Computer, and Systems Engineering at the Rensselaer Polytechnic Institute as an Assistant Professor in December 2008. He earned the Ph.D. degree in applied mathematics from the University of Twente, The Netherlands in 2005. In 2005 – 2008, he was a Postdoctoral Researcher at the University of Pennsylvania. Dr. Julius research interests include systems and control, systems biology, stochastic models in systems biology, control of biological systems, hybrid systems, and mathematical systems theory. His research group is supported by the US National Science Foundation through 4 research grants (as Principle Investigator), and the US Army Research Office through 2 research grants (as Co-Principle Investigator). He received an NSF CAREER award in 2010. Dr. Julius has published 21 peer-reviewed journal articles and over 60 peer-reviewed conference articles. He is a co-author of the Best Application Paper in the 10th International Conference on Ubiquitous Robots and Ambient Intelligence (URAI 2013), and a finalist for the Best Paper Award at the IEEE/RSJ International Conference on Intelligent Robots and Systems (IROS 2013). Dr. Julius is an Associate Editor in the IEEE Control Systems Society Conference Editorial Board, and served in the Technical Program Committee for the IEEE Conference on Automation Science and Engineering (CASE 2010), ACM/IEEE Hybrid Systems: Computation and Control (HSCC 2013), InternationalWorkshop on Hybrid Systems in Biology (HSB 2013), 2104 Summer Simulation Multi-Conference, Robotics: Science and Systems (RSS 2014), and the 21st International Symposium on Mathematical Theory of Networks and Systems (MTNS 2014). He is also a co-editor of the book Microbiorobotics, which was published by Elsevier in 2012.
Ramkrishna Pasumarthy was born on 12th August 1978 in Srikakulam India. He received his Masters and PhD degrees from VJTI Mumbai, India and University of Twente, The Netherlands in 2001 and 2006 respectively, with specialization in Systems and Control. Later he held post doc positions from 2007-2009 at University of Melbourne, Australia and University of California Los Angeles. Later he joined BITS Pilani Hyderabad Campus, India, as an Assistant Professor in Electrical Engineering from 2010-2011. He is currently an Assistant Professor at the Electrical Engineering department, Indian Institute of Technology, Madras, India. His research interests lie in the area of nonlinear control theory and infinite dimensional systems in the port-Hamiltonian framework, time delay systems and control of computing systems with specific applications to Cloud Computing Systems. He has coauthored over thirty research articles in peer reviewed journals and conferences. He is a team member of the Interdisciplinary Laboratory of Data Sciences funded by IIT Madras. He was earlier the recipient of the early career research grant at the University of Melbourne. He served as the local arrangements chair for the first Indian Control Conference held at IIT Madras in Jan. 2015 and is the program chair for the 2nd Indian Control Conference to be held at IIT Hyderabad in Jan. 2016.
Jacquelien M. A. Scherpen received the M.Sc. and Ph.D. degrees in applied mathematics from the University of Twente, The Netherlands, in 1990 and 1994, respectively, in the field of systems and control. From 1994 to 2006 she was at the Delft University of Technology, The Netherlands, with the Circuits and Systems and Control Engineering groups of Electrical Engineering. From 2003 to 2006 she was with the Delft Center for Systems and Control at Delft University of Technology, The Netherlands. Since Septem- ber 2006 she has been holding a Professor position at the University of Groningen in the Engineering and Technology institute Groningen (ENTEG) of the faculty of Mathematics and Natural Sciences. Since 2013 she is scientific director of ENTEG. She has held visiting research positions at the Universit de Compiegne, France, SUPELEC, Gifsur-Yvette, France, the University of Tokyo, Japan and the Old Dominion University, VA, USA. Her research interests include nonlinear model reduction methods, realization theory, nonlinear control methods, with in particular modeling and control of physical systems with applications to electrical circuits, electro-mechanical systems and mechanical systems. Distributed control systems with applications to smart grids, industrial and space applications are included in her interests. Dr. Scherpen has been an Associate Editor of the IEEE Transactions on Automatic Control, and of the International Journal of Robust and Nonlinear Control. Currently, she is an Associate Editor of the IMA Journal of Mathematical Control and Information, and she is on the editorial board of the International Journal of Robust and Nonlinear Control. She is (co-author of 58 papers in high quality peer reviewed journals, and 9 chapters in books, co-editor of a book, and more than 140 papers in peer-reviewed conference proceedings.