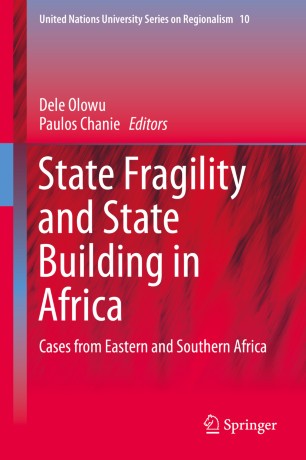 Cases from Eastern and Southern Africa

This book describes the contrast between the strong economic growth and democratization that have occurred in Africa and its stalling political progress. It presents and discusses fragility as the phenomenon that has caused the state to remain weak and faltering and has led to at least one third of the continent’s citizens living in fragile states. Following the examination of the drivers of fragility and the impact of fragility on citizens and neighbouring states, the book discusses capacity building approaches. This part shows how effective states can be built on the African continent, a process that would result in a change from state fragility to state resilience. It is based on lessons learnt from close studies of the nations where the state has been most developed in the region, in Eastern and Southern Africa. The book provides and responds to the most recent and up-to-date information on African development and uses insights of people who have lived and worked in the continent for most of their lives.  ​

Dr. Dele Olowu is a freelance consultant on governance and capacity development. He was formerly Professor of Administration and Local Government in Nigeria and has taught and conducted research in numerous other countries, including the Netherlands, Ethiopia, Ghana, Botswana, Namibia, Canada and the United States. He has served as adviser to African governments and the United Nations Economic Commission for Africa and the African Development Bank, as well as on development policy management boards in Africa and Europe. Olowu has pastored churches in Nigeria, Ethiopia and the Netherlands and currently oversees the network of Redeemed Christian Church of God churches in the Netherlands and the rest of mainland Europe. He has studied at the Universities of Ibadan and Ife and Birmingham University and is the author of several books and over 60 articles.

Dr. Paulos Chanie is an Ethiopian. He holds a Ph.D in Development Studies (2007) from The Institute of Social Studies, The Hague, Netherlands. Dr. Paulos has been teaching in tertiary level educational institutions, doing research and consulting for local and international organizations in areas of public policy and administration, development management, decentralization and civil service reform. He has published in the areas of public service management, ethnic politics, clientelism, civil service reform and decentralization. He has served as head of department at Addis Ababa University and General Secretary of Ethiop

ian Management Professionals Association. Dr. Paulos is currently an Assistant Professor at Addis Ababa University and the Director of Research at OSSREA (Organization for Social Science research in Eastern and Southern Africa).

In State Fragility in Africa: Impact and Capacity Building Approaches, Professor Dele Olowu examines the various manifestations of the subject through country case studies from  Eastern, Central and Southern sub-regions of the African continent (Angola, the Democratic Republic of Congo, Kenya, Lesotho, South Africa, and Zimbabwe).  Readers would find echoes of the issues examined in the book in the recent instability in Mali and the on-going crises in the Central African Republic and Southern Sudan. In a thoughtful and insightful concluding chapter, Olowu recommends a range of sensible measures for assuring strong governance institutions that can help mitigate the risks of fragility in African countries. This is a timely and well-researched contribution to the literature on state fragility in Africa.

State Fragility in Africa: Drivers, Impact and Capacity Building Approaches is one of the most comprehensive publications on the subject matter of state fragility in Africa. Dele Olowu and Paulo Chanie’s contribution to the current developments in the African State is by far the most authoritative, well-informed and nuanced commentary that should be taken seriously by academics, policy makers and researchers alike. Covering social, economic and political foundations of fragility, weakness of regional institutions, poverty amidst wealth and skewed neighborhood policies in conflict and post-conflict states, this book alerts us of the risk of adopting single issue attributions of state fragility. It goes further to show the way on how to understand and eventually come to grips with resolving these intricate issues. This book offers food for thought, a manifesto for professionals and practitioners. It is a must read by those concerned with developing the capacity of fragile states in Africa and elsewhere as well those strive to lament the significant academic and findings intellectual reflections of this multidisciplinary research and study.