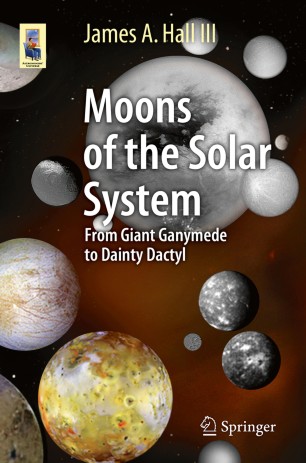 Moons of the Solar System

From Giant Ganymede to Dainty Dactyl

This book captures the complex world of planetary moons, which are more diverse than Earth's sole satellite might lead you to believe. New missions continue to find more of these planetary satellites, making an up to date guide more necessary than ever.  Why do Mercury and Venus have no moons at all? Earth's  Moon, of course, is covered in the book with highly detailed maps. Then we move outward to the moons of Mars, then on to many of the more notable asteroid moons, and finally to a list of less-notable ones. All the major moons of the gas giant planets are covered in great detail, while the lesser-known satellites of these worlds are also touched on.

Readers will learn of the remarkable trans-Neptunian Objects – Pluto, Eris, Sedna, Quaoar –including many of those that have been given scant attention in the literature. More than just objects to read about, the planets' satellites provide us with important information about the history of the solar system.

Projects to help us learn more about the moons are included throughout the book. Most amateur astronomers can name some of the more prominent moons in the solar system, but few are intimately familiar with the full variety that exists in our backyard: 146 and counting. As our understanding of the many bodies in our solar system broadens, this is an invaluable tour of our expanding knowledge of the moons both near and far.