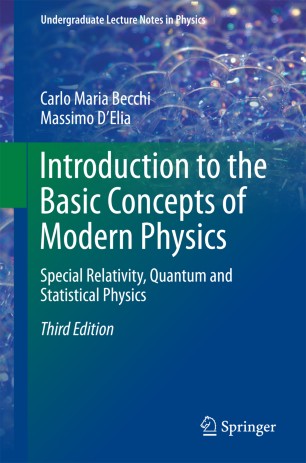 Introduction to the Basic Concepts of Modern Physics

This is the third edition of a well-received textbook on modern physics theory. This book provides an elementary but rigorous and self-contained presentation of the simplest theoretical framework that will meet the needs of undergraduate students. In addition, a number of examples of relevant applications and an appropriate list of solved problems are provided.Apart from a substantial extension of the proposed problems, the new edition provides more detailed discussion on Lorentz transformations and their group properties, a deeper treatment of quantum mechanics in a central potential, and a closer comparison of statistical mechanics in classical and in quantum physics.

The first part of the book is devoted to special relativity, with a particular focus on space-time relativity and relativistic kinematics. The second part deals with Schrödinger's formulation of quantum mechanics. The presentation concerns mainly one-dimensional problems, but some three-dimensional examples are discussed in detail. The third part addresses the application of Gibbs’ statistical methods to quantum systems and in particular to Bose and Fermi gases.

Carlo Maria Becchi was Professor of Theoretical Physics at the University of Genoa, Italy, from 1976 until his retirement in 2010. He twice served as Chairman of the Physics Faculty at the university and from 1997 to 2003 he was Chairman of the Theory Committee of the Istituto Nazionale di Fisica Nucleare (INFN). Starting in 1971, Professor Becchi undertook a systematic study of renormalization theory, considering in particular the renormalization of symmetries, and he subsequently devoted much attention to the extension of renormalization techniques to various situations, including string theory. In 2009 he jointly received the Dannie Heineman Prize for Mathematical Physics from the American Physical Society and American Institute of Physics for discovery of the Becchi-Rouet-Stora symmetry.

Massimo D'Elia is Associate Professor in the Physics Department at Pisa University, Italy. His research interests include quantum field theory, strong interactions, lattice quantum chromodynamics (QCD), and QCD in extreme conditions. He is the author of 170 publications in the field.