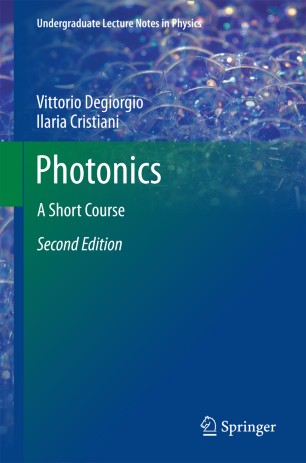 This extended and revised edition will serve as a concise, self-contained, up-to-date introduction to Photonics for undergraduate students. It can also be used as a primer by researchers and professionals who start working in the field. Blending theory with technical descriptions, the book covers a wide range of topics, including the general mechanism of laser action, continuous and pulsed laser operation, optical propagation in isotropic and anisotropic media, operating principles and structure of passive optical components, electro-optic and acousto-optic modulation, solid-state lasers, semiconductor lasers and LEDs, nonlinear optical phenomena, and optical fiber components and devices. The book concludes with an overview of applications, including optical communications, telemetry and sensing, industrial and biomedical applications, solid-state lighting, displays, and photovoltaics. This second edition includes a set of problems at the end of all but the last chapter. These problems deal with numerical computations designed to illustrate the magnitudes of important quantities and are also intended to test the student’s ability to apply theoretical formulas.

Vittorio Degiorgio was Full Professor in Physics of Matter at the University of Pavia, Italy, from 1980 to 2011, since which time he has been Professor Emeritus at the university. He was Head of the Department of Electronics at the University from 1991 to 1997 and Director of the Laser Center from 2007 to 2011. Prior to joining the University of Pavia, he had been a researcher at the National Council of Research (CNR) since 1964, operating at CISE Labs, Milan, Italy. Dr. Degiorgio is a Fellow of the Optical Society of America and of the Italian Physical Society. He has been a Member of the Physics Panel of the European Union and of the Scientific Council and Directive Council of the European Laboratory for Nonlinear Spectroscopy (LENS), Florence, Italy. He is also a past Vice-president of the National Institute for the Physics of Matter (INFM). Dr. Degiorgio is the author of more than 200 articles in Photonics and Statistical Physics as well as co-author or co-editor of five books.<

Ilaria Cristiani has been Assistant Professor in Applied Physics at the University of Pavia since 1999. Her teaching activity is mainly devoted to Physics and Photonics for the Engineering courses. Up to 2010 she was also coordinator of a Masters Course in Materials Science at the Istituto Universitario di Studi Superiori (IUSS), Pavia. Dr. Cristiani’s scientific activity is mainly aimed at the experimental study of linear and nonlinear optical phenomena in guided-wave structures, for applications to optical communications and biophotonics. She has co-authored about 70 papers published in peer-reviewed international journals and four books. Dr. Cristiani has coordinated several research projects in the field of Photonics funded by the Italian University Ministry, by private foundations, and by the European Community.