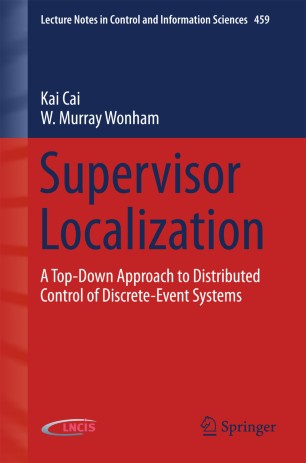 A Top-Down Approach to Distributed Control of Discrete-Event Systems

The basic localization theory is first presented in the Ramadge–Wonham language-based supervisory control framework, then demonstrated with distributed control examples of multi-robot formations, manufacturing systems, and distributed algorithms. An architectural approach is adopted to apply localization to large-scale DES; this yields a heterarchical localization procedure, which is also demonstrated with benchmark examples. Moreover, a state-based framework, state-tree structures, is exploited for efficient computation of localization. Finally localization is extended to timed DES, which addresses distributed control synthesis with temporal specifications. The authors’ TCT software and sourcecode will help the reader to reproduce the results demonstrated in the examples.

Academic researchers and graduate students interested in discrete-event and distributed systems and control will find this book an instructive resource. It will also be useful for researchers in manufacturing, supply-chain and logistics and practitioners in related industries.

W.Murray Wonham received the B. Eng. degree in engineering physics from McGill University in 1956, and the Ph.D. in control engineering from the University of Cambridge (U.K.) in 1961. From 1961 to 1969 he was associated with several U.S. research groups in control. Since 1970 he has been a faculty member in Systems Control, with the Department of Electrical and Computer Engineering of the University of Toronto.

Professor Wonham is the author of “Linear Multivariable Control: A Geometric Approach” (Springer-Verlag: 3rd ed. 1985) and co-author (with C. Ma) of “Nonblocking Supervisory Control of State Tree Structures” (Springer-Verlag: 2005). He is a Fellow of the Royal Society of Canada, a Life Fellow of the IEEE and a Foreign Associate of the (U.S.) National Academy of Engineering. In 1987 he received the IEEE Control Systems Science and Engineering Award and in 1990 was Brouwer Medallist of the Netherlands Mathematical Society. In 1996 he was appointed University Professor in the University of Toronto, and in 2000 University Professor Emeritus.