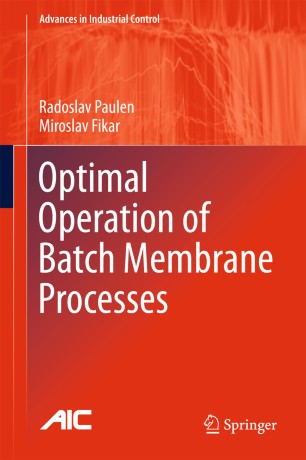 This study concentrates on a general optimization of a particular class of membrane separation processes: those involving batch diafiltration. Existing practices are explained and operational improvements based on optimal control theory are suggested. The first part of the book introduces the theory of membrane processes, optimal control and dynamic optimization. Separation problems are defined and mathematical models of batch membrane processes derived. The control theory focuses on problems of dynamic optimization from a chemical-engineering point of view. Analytical and numerical methods that can be exploited to treat problems of optimal control for membrane processes are described. The second part of the text builds on this theoretical basis to establish solutions for membrane models of increasing complexity. Each chapter starts with a derivation of optimal operation and continues with case studies exemplifying various aspects of the control problems under consideration. The authors work their way from the limiting flux model through increasingly generalized models to propose a simple numerical approach to the general case of optimal operation for batch diafiltration processes. Researchers interested in the modelling of batch processes or in the potential industrial applications of optimal control theory will find this monograph a valuable source of inspiration, instruction and ideas.

Radoslav Paulen received MSc degree and PhD degrees in Automation from Slovak University of Technology in Bratislava in 2008 and 2012, respectively. Currently, he is a post-doc with the Chair of Process Dynamics and Operations at the Department of Biochemical and Chemical Engineering of Technische Universität Dortmund. He is interested in optimal process control, real-time optimisation, parameter estimation, membrane filtration, emulsion polymerisation.
Miroslav Fikar received his MSc and PhD degrees in Chemical Process Control from the Slovak University of Technology in Bratislava in 1989 and 1994, respectively. He has stayed with the Faculty of Chemical and Food Technology STU where he is currently a professor and institute director. He was Postdoc Fellow in Nancy, France, Alexander von Humboldt Fellow in Bochum, Germany and spent several stays in Denmark, Germany, France, Switzerland. His current research interests include optimal control, MPC, and chemical process control. He is a coauthor of several monographs including Process Modelling, Identification, and Control (Springer, 2007).