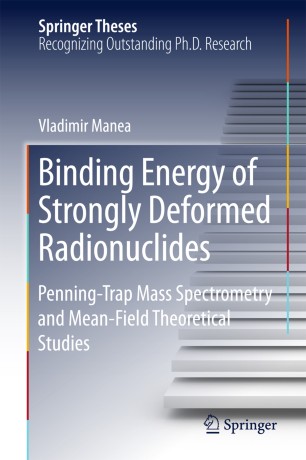 This thesis reports results of precision mass spectrometry of exotic nuclides as a means of elucidating their structure. The work was performed with the ISOLTRAP spectrometer at CERN’s ISOLDE facility. The author furthermore offers an overview of existing techniques used in Penning-trap mass spectrometry and also reports on recent promising developments regarding ISOLTRAP.  This eloquently written treatment covers both theory and experiment, and includes a general phenomenological introduction to the nuclear-structure intuition contained in the trends of nuclear binding energies.

Vladimir Manea received his physics bachelor degree from the University of Bucharest in 2010. He then followed the master courses of Université Paris-Sud in Orsay, from which in 2011 he received a three-year PhD scholarship to work on mass spectrometry in the nuclear-structure group of Centre de Sciences Nucléaires et de Sciences de la Matière, Orsay. His PhD research took place at CERN in the ISOLDE laboratory, where he performed Penning-trap mass spectrometry of radioactive nuclides with the ISOLTRAP setup. Since his PhD graduation in 2014 he continues at ISOLTRAP as a postdoc of the Max Planck Institute for Nuclear Physics, Heidelberg.