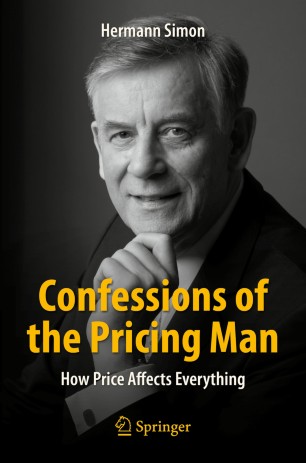 Confessions of the Pricing Man

How Price Affects Everything

The world’s foremost expert on pricing strategy shows how this mysterious process works and how to maximize value through pricing to company and customer.

In this engaging and practical narrative, Hermann Simon leaves nothing out of the pricing cocktail, explaining each ingredient through dozens of stories collected over four decades in the trenches and behind the scenes. A world-renowned speaker on pricing and a trusted advisor to Fortune 500 executives, Simon’s lifelong journey has taken him from rural farmers’ markets, to a distinguished academic career, to a long second career as an entrepreneur and management consultant to companies large and small throughout the world.  Along the way, he has learned from Nobel Prize winners and leading management gurus, and helped countless managers and executives use pricing as a way to create new markets, grow their businesses, and gain a sustained competitive advantage.  Here, for consumers and business people alike, he reveals the secrets of successful pricing practices, and shares the wisdom and common sense that will forever change the way you thinking about pricing.

“This is the best book I know to open your mind to the practical problems in setting your prices.”

“Hermann Simon is ‘The Pricing Man’ and a giant within

our discipline. With more than 40 years of experience in pricing research and practice with companies across the globe and across all major industries, he possesses the know-how to help organizations large, medium-sized, and small to improve their pricing acumen. This book will help you improve your pricing management skills, strategies, and tactics – and it will help your company also.”

“Hermann Simon is a man who can get upset about being offered a 35 percent discount on a new digital camera. His fascination with ‘willingness to pay’ is infectious. As much as any individual, he is behind the professionalization of pricing in the past couple of decades.”

WILLIAM POUNDSTONE, Author, Priceless: The Myth of Fair Value (and How to Take Advantage of It)

Hermann Simon is Chairman of Simon-Kucher & Partners Strategy & Marketing Consultants, which has 27 offices in 22 countries. He is the world’s leading authority on pricing.

Simon was a professor of business administration and marketing at the Universities of Mainz (1989-1995) and Bielefeld (1979-1989). He was also a visiting professor at Harvard Business School, Stanford, London Business School, INSEAD, Keio University in Tokyo and the Massachusetts Institute of Technology. He studied economics and business administration at the universities of Bonn and Cologne. He received his diploma (1973) and his doctorate (1976) from the University of Bonn. He has received numerous international awards and honorary doctorates and was voted the most influential management thinker in German-speaking countries after the late Peter Drucker.

Simon founded Simon-Kucher & Partners in 1985 together with two of his doctoral students. After advising the firm for a decade, Hermann left his academic career in 1995 to assume the full-time role as CEO of Simon-Kucher & Partners, where he led the firm’s international expansion. When he left that role in 2009, Simon-Kucher & Partners had become the world’s largest pricing consulting practice, active in all major industries. The firm has consulted with almost 100 members of the Fortune 500, some in decades-long relationships.

Simon has published over 30 books in 26 languages, including the worldwide bestsellers Power Pricing (Free Press, 1997), Manage for Profit, Not for Market Share (Harvard Business School Press, 2006), Hidden Champions (Harvard Business School Press, 1996), and Hidden Champions of the 21st Century (Springer New York, 2009). He has served on the editorial boards of numerous business journals, including the International Journal of Research in Marketing, Management Science, Recherche et Applications en Marketing, Décisions Marketing, European Management Journal as well as several German journals. Since 1988 he has been a columnist for the business monthly Manager Magazin. He is also a board member of numerous foundations and corporations.