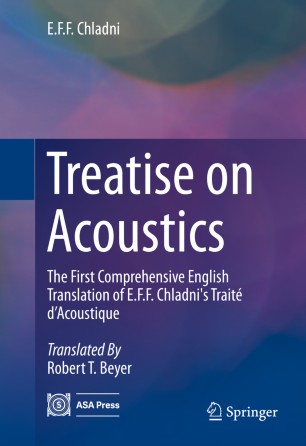 This is the first comprehensive translation of the expanded French version of E.F.F. Chladni’s Traité d’Acoustique, using Chladni's 1802 Die Akustik for reference and clarification.  Chladni’s experiments and observations with sound and vibrations profoundly influenced the development of the field of Acoustics.  The famous Chladni diagrams along with other observations are contained in Die Akustik, published in German in 1802 and Traité d’Acoustique, a greatly expanded version, published in French in 1809.  The present translation was undertaken by Robert T. Beyer, PhD (1920-2008), noted acoustician, Professor of Physics at Brown University, and Gold Medal recipient of the Acoustical Society of America. Along with many other projects completed over the course of his career, Dr. Beyer translated Von Neumann’s seminal work, Mathematical Foundations of Quantum Mechanics from the original German, spent 30 years translating Russian physics treatises and journals, served as editor of the English translation of the Soviet Journal of Experimental and Theoretical Physics, and also authored Sounds of our Times: Two Hundred Years of Acoustics.

“The book gives a good and detailed insight into the times of pre-numerical acoustics around 1800. Robert T. Beyer's book can be recommended to those willing to study in detail what the thoughts of a leading experimental physicist were—despite that they were all called ‘philosophers at that time.” (Heinrich Metzen, Noise Control Engineering Journal, Vol. 64 (5), September-October, 2016)
Buy options