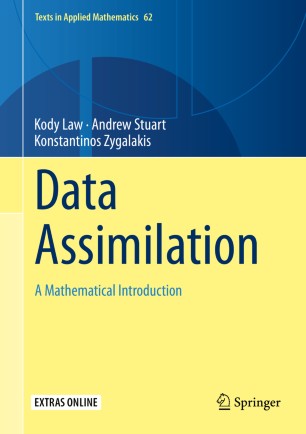 This book provides a systematic treatment of the mathematical underpinnings of work in data assimilation, covering both theoretical and computational approaches. Specifically the authors develop a unified mathematical framework in which a Bayesian formulation of the problem provides the bedrock for the derivation, development and analysis of algorithms; the many examples used in the text, together with the algorithms which are introduced and discussed, are all illustrated by the MATLAB software detailed in the book and made freely available online.

This book is aimed at mathematical researchers interested in a systematic development of this interdisciplinary field, and at researchers from the geosciences, and a variety of other scientific fields, who use tools from data assimilation to combine data with time-dependent models. The numerous examples and illustrations make understanding of the theoretical underpinnings of data assimilation accessible. Furthermore, the examples, exercises and MATLAB software, make the book suitable for students in applied mathema

tics, either through a lecture course, or through self-study.

Kody Law is a Mathematician in the Computer Science and Mathematics Division at Oak Ridge National Laboratory.  He received his PhD in Mathematics from the University of Massachusetts in 2010, and subsequently held positions as a postdoc at the University of Warwick and a research scientist at King Abdullah University of Science and Technology.  He has published in the areas of computational applied mathematics, physics, and dynamical systems.  His current research interests are focused on inverse uncertainty quantification: data assimilation, filtering, and Bayesian inverse problems.

Andrew M. Stuart is a Professor at the Mathematics Institut

e, Warwick University. He received his PhD from Oxford University, and has previously held permanent positions at Bath University and Stanford University.  His primary research interests are in the field of applied and computational mathematics. He has won numerous awards, including the SIAM JD Crawford Prize and the Monroe Martin Prize in Applied Mathematics; he is also a SIAM Fellow. He has authored over one hundred journal article, and three books, including Multiscale Methods: Averaging and Homogenization (Springer, 2008, with G. Pavliotis).

Konstantinos Zygalakis is a Lecturer in Applied Mathematics at the University of Southampton. He received his PhD from the University of Warwick in 2009 and held postdoctoral positions at the Universities of Cambridge, Oxford and the Swiss Federal Institute of Technology, Lausanne  before joining Southampton in 2012. In 2011 he was awarded a Leslie Fox prize (IMA UK). His research interests span from the theoretical and numerical aspects of stochastic processes and homogenization theory  to applications  in mathematical biology.

“The mathematical style of the book is accessible to post-graduate students and combines formal mathematics with intuitive arguments and summaries of higher level results. … the book is a good guide on dynamic data assimilation. … the book suitable as a reference book for modelling on coordinates, whenever the sample space has a Euclidean vector space structure.” (Vera Pawlowsky-Glahn, zbMATH 1353.60002, 2017)

“This book provides a Bayesian perspective of data assimilation, with a focus on smoothing and filtering problems with generic dynamical models. … The authors also provide many numerical results, focusing on simple models that help the reader easily grasp the important properties of the underlying algorithms. In my opinion, this book is well suited to a graduate level course on data assimilation for applied mathematicians.” (David T. B. Kelly, Mathematical Reviews, December, 2016)

“The authors have used a collection of dynamical systems examples throughout the book. … Exercises are also given at the end of each chapter. The first half of this book would be very suitable as a graduate level textbook and concise reference on discrete time approaches to the data assimilation problem from a Bayesian point of view. The second half of the book … will primarily be of interest to researchers working in this area.” (Brian Borchers, MAA Reviews, maa.org, May, 2016)
Buy options