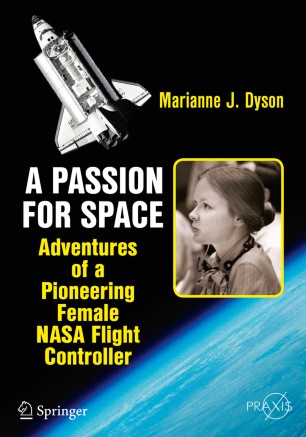 A Passion for Space

Marianne J. Dyson recounts for us a time when women were making the first inroads into space flight control, a previously male-dominated profession. The story begins with the inspiration of the Apollo 11 landing on the Moon and follows the challenges of pursuing a science career as a woman in the 70s and 80s, when it was far from an easy path.

Dyson relates the first five space shuttle flights from the personal perspective of mission planning and operations in Houston at the Johnson Space Center, based almost exclusively on original sources such as journals and NASA weekly activity reports. The book’s historical details about astronaut and flight controller training exemplify both the humorous and serious aspects of space operations up through the Challenger disaster, including the almost unknown fire in Mission Control during STS-5 that nearly caused an emergency entry of the shuttle.

From an insider with a unique perspective and credentials to match, this a must-read for anyone interested in the workings of NASA during one of its busiest and defining times, and the challenges faced by women pursuing scientific careers.