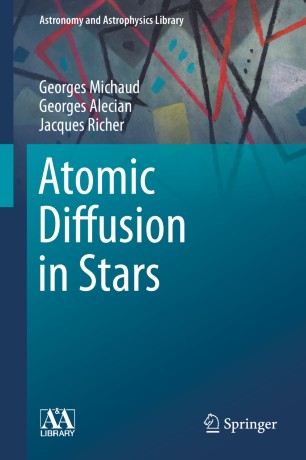 Prof. Georges Michaud has been a Professeur Émérite at the Université de Montréal since 2005. He has worked in their physics department as a professor since 1969, after obtaining his PhD in astronomy from the California Institute of Technology. He is the recipient of the 2006 C.S. Beals Award from the Canadian Astronomical Society and has been a member of the Royal Society of Canada since 1992. He was awarded the  Steacie Prize of the NRC of Canada in 1980 and the Médaille Janssen  of the Académie des sciences de Paris in 1982.

Dr. Georges Alecian is a CNRS Research Director Emeritus at CNRS-Observatoire de Paris (LUTH). His main fields of research are stellar physics, theory and modeling of transport processes of elements and atomic diffusion. He was director of Laboratory/Department (LAEC/DAEC, CNRS-Observatoire de Paris, Université Paris-Diderot) from 1996 to 2001, and he has been member of the CoRoT space mission scientific council since 1998.  Since 2012, he is foreign member of the National Academy of Sciences of the Republic of Armenia (NAS RA).

Dr. Jacques Richer obtained his PhD in astrophysics from the Université de Montréal in 1993, and has been a research assistant in the physics department’s astronomy group since then. He has also been a scientific computing analyst and consultant with various Québec academic organizations (CERCA, RQCHP, and finally, Calcul Québec) from 1997 to 2015.

His main research activities include numerical simulation of element diffusion inside evolving stars, with emphasis on the role of radiative forces, turbulence mixing and stellar winds.