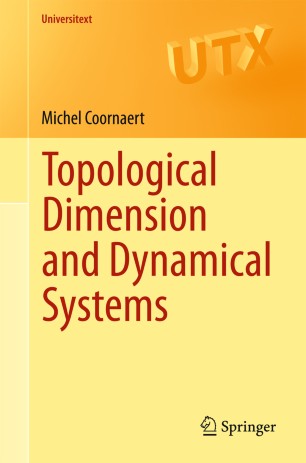 Translated from the popular French edition, the goal of the book is to provide a self-contained introduction to mean topological dimension, an invariant of dynamical systems introduced in 1999 by Misha Gromov. The book examines how this invariant was successfully used by Elon Lindenstrauss and Benjamin Weiss to answer a long-standing open question about embeddings of minimal dynamical systems into shifts.

A large number of revisions and additions have been made to the original text. Chapter 5 contains an entirely new section devoted to the Sorgenfrey line. Two chapters have also been added: Chapter 9 on amenable groups and Chapter 10 on mean topological dimension for continuous actions of countable amenable groups. These new chapters contain material that have never before appeared in textbook form. The chapter on amenable groups is based on Følner’s characterization of amenability and may be read independently from the rest of the book.

Although the contents of this book lead directly to several active areas of current research in mathematics and mathematical physics, the prerequisites needed for reading it remain modest; essentially some familiarities with undergraduate point-set topology and, in order to access the final two chapters, some acquaintance with basic notions in group theory. Topological Dimension and Dynamical Systems is intended for graduate students, as well as researchers interested in topology and dynamical systems. Some of the topics treated in the book directly lead to research areas that remain to be explored.

Professor Michel Coornaert teaches at the University of Strasbourg. He is the author of many Springer volumes including Cellular Automata and Groups (2010), Symbolic Dynamics and Hyperbolic Groups (1993) and Geometrie et theorie des groupes (1990).