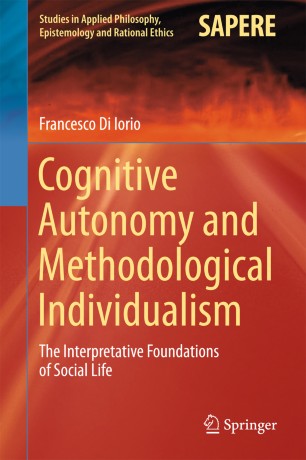 The Interpretative Foundations of Social Life

“Di Iorio offers a new approach to Hayek’s Sensory Order, linking neuroscience to the old Verstehen tradition and to contemporary theories of self-organizing systems; this should be on the reading list of everyone who is interested in Hayek’s thought.”

University at Buffalo, editor of The Monist

“This impressive and well-researched book breaks new ground in our understanding of F.A. Hayek and of methodological individualism more generally. It shows that methodological individualism sanctions neither an atomistic view of society nor a mechanical determinism. The book carefully analyzes an important tradition in the social sciences, and compares it to many important philosophical, sociological and economic systems of thought. This is an enlightening book for all scholars interested in the methodological problems of the social sciences.”

“One of Hayek’s most important contributions is his linking of complex methodological individualism, which deals with the emergence of spontaneous orders and unintended collective structures in complex self-organizing social systems, with a cognitive psychology. What makes Francesco Di Iorio’s book of great interest is that, by building on Hayek’s seminal book The Sensory Order, it deepens the connections between cognition and rules of just conduct, taking into account relevant theories on subjectivity and consciousness such as phenomenology, hermeneutics and enactivism.”

“In this thoughtful and enlightening book Francesco Di Iorio uses Hayek’s cognitive psychology as the starting point for investigation of the relationship between the autonomy of the agent and socio-cultural influences within methodological individualism. The book provides an illuminating and innovative analysis of a central issue in the philosophy of social science by setting Hayek’s view on mind and action in fruitful relation to approaches such as Gadamer’s hermeneutics, Merleau-Ponty’s phenomenology, Varela’s and Maturana’s enaction, Boudon’s interpretative sociology, Popper’s fallibilism and Mises’ praxeology. One of the most interesting aspects of this book is its argument that hermeneutics and fallibilism refer not to two different methods but to the same one.”

“Francesco Di Iorio’s book explores, in an original way, the connections between Hayek’s methodological individualism and his fascinating idea that human mind is both an interpretative device and a self-organizing system. It is a brilliant, clearly written work, characterized by a certain intellectual courage, which makes a remarkable contribution to the sociology of knowledge.”