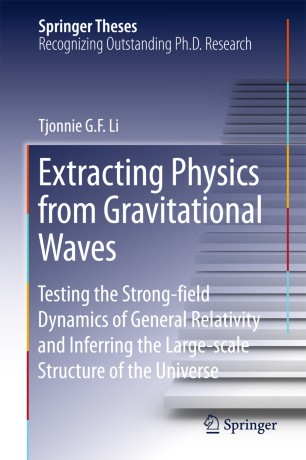 Tjonnie Li's thesis covers two applications of Gravitational Wave astronomy: tests of General Relativity in the strong-field regime and cosmological measurements. The first part of the thesis focuses on the so-called TIGER, i.e. Test Infrastructure for General Relativity, an innovative Bayesian framework for
performing hypothesis tests of modified gravity using ground-based GW data. After developing the framework, Li simulates a variety of General Relativity deviations and demonstrates the ability of the aforementioned TIGER to measure them. The advantages of the method are nicely shown and compared to other, less generic methods. Given the extraordinary implications that would result from any measured deviation from General Relativity, it is extremely important that a rigorous statistical approach for supporting these results would be in place before the first Gravitational Wave detections begin. In developing TIGER, Tjonnie Li shows a large amount of creativity and originality, and his contribution is an important step in the direction of a possible discovery of a deviation (if any) from General Relativity.
In another section, Li's thesis deals with cosmology, describing an exploratory study where the possibility of cosmological parameters measurement through gravitational wave compact binary coalescence signals associated with electromagnetic counterparts is evaluated. In particular, the study explores the
capabilities of the future Einstein Telescope observatory. Although of very long term-only applicability, this is again a thorough investigation, nicely put in the context of the current and the future observational cosmology.

The author is the winner of the 2013 Stefano Braccini Thesis Prize awarded by the Gravitational Wave International Committee.