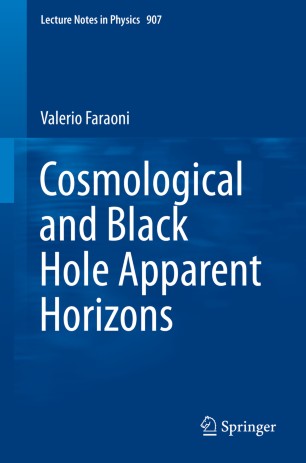 This book overviews the extensive literature on apparent cosmological and black hole horizons.

In theoretical gravity, dynamical situations such as gravitational collapse, black hole evaporation, and black holes interacting with non-trivial environments, as well as the attempts to model gravitational waves occurring in highly dynamical astrophysical processes, require that the concept of event horizon be generalized. Inequivalent notions of horizon abound in the technical literature and are discussed in this manuscript.

The book begins with a quick review of basic material in the first one and a half chapters, establishing a unified notation. Chapter 2 reminds the reader of the basic tools used in the analysis of horizons and reviews the various definitions of horizons appearing in the literature. Cosmological horizons are the playground in which one should take baby steps in understanding horizon physics. Chapter 3 analyzes cosmological horizons, their proposed thermodynamics, and several coordinate systems. The remaining chapters discuss analytical solutions of the field equations of General Relativity, scalar-tensor, and f(R) gravity which exhibit time-varying apparent horizons and horizons which appear and/or disappear in pairs. An extensive bibliography enriches the volume.

The intended audience is master and PhD level students and researchers in theoretical physics with knowledge of standard gravity.