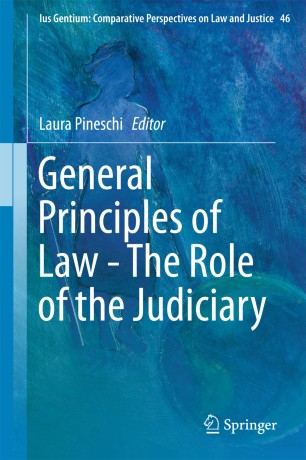 General Principles of Law - The Role of the Judiciary

This book examines the role played by domestic and international judges in the “flexibilization” of legal systems through general principles. It features revised papers that were presented at the Annual Conference of the European-American Consortium for Legal Education, held at the University of Parma, Italy, May 2014.
This volume is organized in four sections, where the topic is mainly explored from a comparative perspective, and includes case studies. The first section covers theoretical issues. It offers an analysis of principles in shaping Dworkin’s theories about international law, a reflection on the role of procedural principles in defining the role of the judiciary, a view on the role of general principles in transnational judicial communication, a study on the recognition of international law from formal criteria to substantive principles, and an inquiry from the viewpoint of neo-constitutionalism.
The second section contains studies on the role of general principles in selected legal systems, including International Law, European Union Law as well as Common Law systems. The third section features an analysis of select legal principles in a comparative perspective, with a particular focus on the comparison between European and American experiences.
The fourth and last section explores selected principles in given areas of law, including the misuse of the lex specialis principle in the relationship between international human rights law and international humanitarian law, the role of the judiciary in Poland as regards discrimination for sexual orientation, and the impact of the ECtHR case law on Italian criminal law with regard to the principle of legality.
Overall, the book offers readers a thoughtful reflection on how the interpretation, application, and development of general principles of law by the judiciary contribute to the evolution of legal systems at both the domestic and international levels as well as