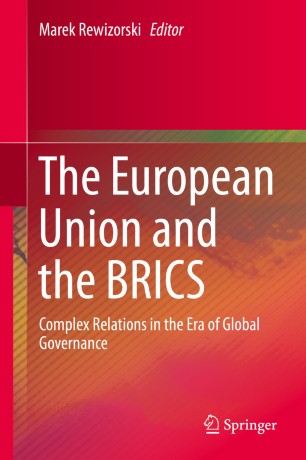 The European Union and the BRICS

Complex Relations in the Era of Global Governance

This book explores the relations between the EU and the BRICS in the areas of politics, economic development, trade, and security. The contributions cover topics such as the position of the EU and BRICS in the global order and the EU as a "normative power," as well as the evolution, characteristics and institutionalization of BRICS and the roles of its member countries Brazil, Russia, India, China, South Africa. The book will appeal to researchers and scholars interested in the rise of BRICS and the resulting challenges and opportunities for the European Union and Global Governance.

Marek Rewizorski – Ph.D. in Political Science, lawyer, Assistant Professor in the Pomeranian University in Słupsk, expert of the Polish National Centre of Science in Global Governance and G8/G20 issues, author of more than 70. works in the areas of Political Science, International Relations and European Studies, reviewer in Journal of International Relations and Development (JIRD), member of several national and international associations.