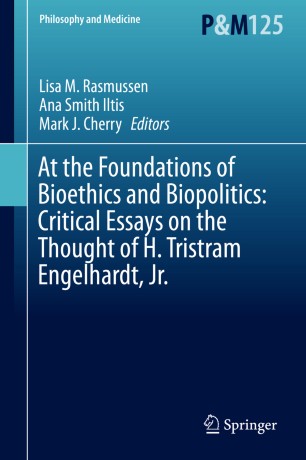 At the Foundations of Bioethics and Biopolitics: Critical Essays on the Thought of H. Tristram Engelhardt, Jr.

Part of the Philosophy and Medicine book series (PHME, volume 125)

This volume brings together a set of critical essays on the thought of Professor Doctor H. Tristram Engelhardt Jr., Co-Founding Editor of the Philosophy and Medicine book series. Amongst the founders of bioethics, Professor Engelhardt, looms large. Many of his books and articles have appeared in multiple languages, including Italian, Romanian, Portuguese, Spanish, and Chinese. The essays in this book focus critically on a wide swath of his work, in the process elucidating, critiquing, and/or commending the rigor and reach of his thought.  This volume compasses analyses of many different aspects of Engelhardt's work, including social and political philosophy, biopolitics, the philosophy of medicine, and bioethics.  It brings together internationally known scholars to assess key elements of Engelhardt's work.