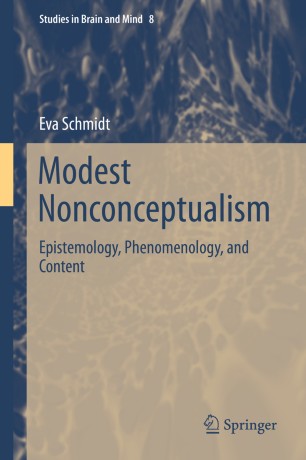 Part of the Studies in Brain and Mind book series (SIBM, volume 8)

The author defends nonconceptualism, the claim that perceptual experience is nonconceptual and has nonconceptual content. Continuing the heated and complex debate surrounding this topic over the past two decades, she offers a sustained defense of a novel version of the view, Modest Nonconceptualism, and provides a systematic overview of some of the central controversies in the debate.

The volume starts off with an explication of the notion of nonconceptual content and a distinction between nonconceptualist views of different strengths, then the author goes on to defend participants in the debate over nonconceptual content against the allegation that their failure to distinguish between a state view and a content view of (non)conceptualism leads to fatal problems for their views. Next, she makes a case for nonconceptualism by refining some of the central arguments for the view, such as the arguments from fineness of grain, from contradictory contents, from animal and infant perception, and from concept acquisition. Then, two central objections against nonconceptualism are rebutted in a novel way: the epistemological objection and the objection from objectivity.