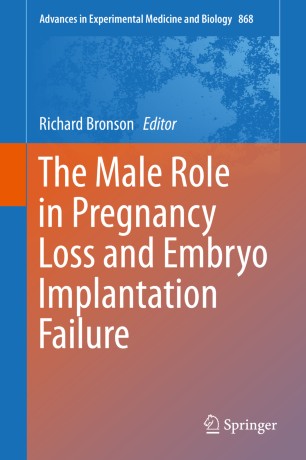 The Male Role in Pregnancy Loss and Embryo Implantation Failure

Part of the Advances in Experimental Medicine and Biology book series (AEMB, volume 868)

Novel topics compiled in this one-of-a-kind volume provide tantalizing hints for clinical application through future translational research. Only recently have we come to ask what role the male might play in pregnancy loss and embryo implantation failure, beyond contributing an abnormal set of paternal chromosomes at fertilization. This volume explores the recent evidence that these conditions might also be related to the transmission of previously unrecognized chromosomal micro-deletions and duplications, or via the epigenetic dysregulation of early embryonic gene function by spermatozoal microRNAs or alterations in sperm DNA methylation patterning, or by DNA damage secondary to either reactive oxygen species or environmental toxicants. In addition, the composition of seminal plasma has been found to be highly complex, containing many factors that play important roles in altering the uterine environment and the female immune system permissive of embryo implantation and trophectoderm outgrowth leading to successful pregnancy. Coverage includes an examination of both spermatozoa and seminal fluid component factors.