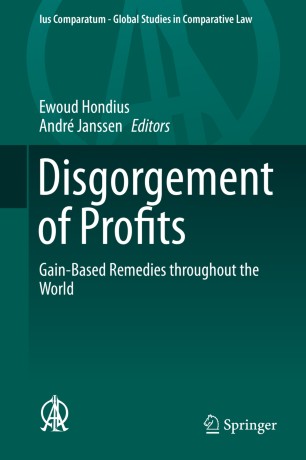 Gain-Based Remedies throughout the World

Disgorgement of profits is not exactly a household word in private law. Particularly in civil law jurisdictions – as opposed to those of the common law – the notion is not well known. What does it stand for? It is best illustrated by examples. One of the best known being the British case of Blake v Attorney General, [2001] 1 AC 268. In which a double spy had been imprisoned by the UK government before escaping and settling in the former Soviet Union. While there wrote a book on his experiences, upon which the UK government claimed the proceeds of the book. The House of Lords, as it then was, allowed the claim on the basis of Blake’s breach of his employment contract. Other examples are the infringement of intellectual property rights, where the damages of the owner are limited, but the profits of the wrongdoer immense. In such cases, the question arises whether the infringing party should be disgorged of his profits.

This volume aims at establishing the notion of disgorgement of profits as a keyword in the discourse of private law. It does not purport to answer the question whether or not such damages should or should not be awarded. It does however aim to contribute to the discussion, the arguments in favour and against, and the organisation of the various actions.