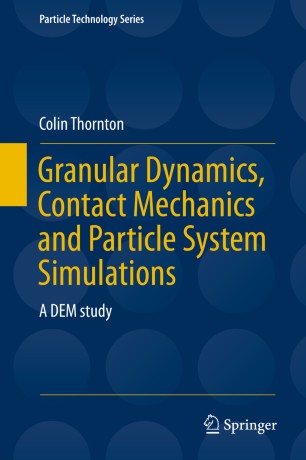 This book is devoted to the Discrete Element Method (DEM) technique, a discontinuum modelling approach that takes into account the fact that granular materials are composed of discrete particles which interact with each other at the microscale level. This numerical simulation technique can be used both for dispersed systems in which the particle-particle interactions are collisional and compact systems of particles with multiple enduring contacts.

The book provides an extensive and detailed explanation of the theoretical background of DEM. Contact mechanics theories for elastic, elastic-plastic, adhesive elastic and adhesive elastic-plastic particle-particle interactions are presented. Other contact force models are also discussed, including corrections to some of these models as described in the literature, and important areas of further research are identified.

A key issue in DEM simulations is whether or not a code can reliably simulate the simplest of systems, namely the single particle oblique impact with a wall. This is discussed using the output obtained from the contact force models described earlier, which are compared for elastic and inelastic collisions. In addition, further insight is provided for the impact of adhesive particles. The author then moves on to provide the results of selected DEM applications to agglomerate impacts, fluidised beds and quasi-static deformation, demonstrating that the DEM technique can be used (i) to mimic experiments, (ii) explore parameter sweeps, including limiting values, or (iii) identify new, previously unknown, phenomena at the microscale.

In the DEM applications the emphasis is on discovering new information that enhances our rational understanding of particle systems, which may be more significant than developing a new continuum model that encompasses all microstructural aspects, which would most likely prove too complicated for practical implementation. The book will be of interest to academic and industrial researchers working in particle technology/process engineering and geomechanics, both experimentalists and theoreticians.

Dr. Colin Thornton, School of Chemical Engineering, University of Birmingham, UK, has published over 100 papers and has an h factor of 30. His main area of expertise is powder technology and in particular he is one of the pioneers of the “discrete element method” (DEM), having made enormous contributions to the application of DEM to theoretical soil mechanics and problems in particulate technology during the last 30 years. Supported by British research council grants and 11 industrial contracts he has developed leading DEM software for the simulation of a variety of systems, which proved outstandingly versatile and is now widely employed for modeling of particulate systems across disciplines.